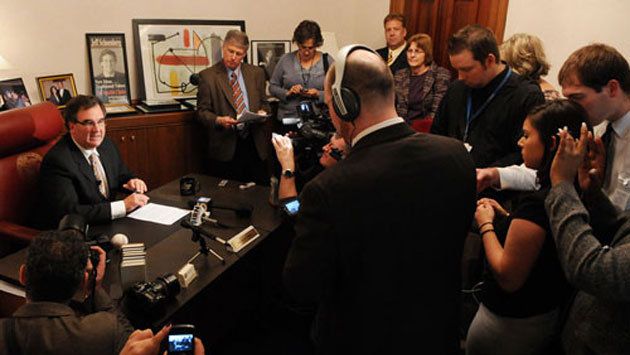 State Sen. Jeff Schoenberg of Evanston announced today that he won't run for re-election next year and that he instead will focus full-time after his term ends on his other career — advising the Pritzker family on its charitable efforts in the area of early childhood development.

Schoenberg was first elected to the state House in 1990 at the age of 30. He was elected to the Senate in 2003 and now serves as assistant majority leader.

He made his announcement at a Springfield news conference this afternoon.

“While I take very seriously my responsibility to my constituents on the North Shore and to the taxpayers of this state, I also know that my position in the State Senate is only one point of entry into public service,” Schoenberg said.

“The issue that has been the center of my passion and what motivates me professionally is improving the lives of children and families – especially in our most vulnerable communities.  With this in mind, I’ve chosen to accept an expanded full-time role advising J.B. and M.K. Pritzker and their family philanthropy on initiatives in the area of early childhood development.”

Schoenberg has served as an advisor to the Pritzker's for the past five years.

Schoenberg during his legislative career worked to provide increased transparency and accountability in state government and championed a comprehensive overhaul of state purchasing laws.

Schoenberg has also been instrumental in advancing a number of important public health initiatives, including ensuring greater access to quality healthcare through a hospital assessment law that has secured over $5 billion in new federal Medicaid funds for safety-net hospitals.  He also gained nationwide attention in his bipartisan efforts to make Illinois a leader in stem cell research.

He said the Illinois-incubated innovations are at a critical point of development and are drawing national and international attention both from a programmatic and policy perspective.

"In order to fully take advantage of this unusual moment, I simply need to dedicate myself with a singular professional approach to lead this work in a way that will require more focus, flexibility and consistency than the responsibilities my two full-time careers currently allow, Schoenberg added.