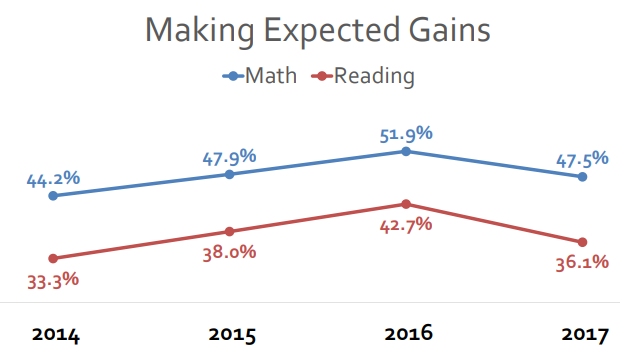 On the heels of a report showing student test scores have fallen in the past year for Evanston/Skokie District 65 students, school board members spent a couple of hours at Tuesday night’s board meeting talking about how that happened.

Board members Candace Chow and Anya Tanyavutti both suggested it had been a difficult year on both a local and national level which could have impacted student success.

“We spent a lot of effort and time and attention on addressing our financial crisis and so that’s a big environmental issue, we can’t quantify the impact but I’m sure there has been an impact,“ Chow said.

Tanyavutti concurred, adding, “A lot of conversations were had post-presidential election by students in terms of their feeling about personal levels of safety based on immigration status racial identity, gender identity.”

Tanyavutti also questioned whether students may have faced technical difficulties during MAP testing which would have impacted their scores, a query that was shot down by staff.

Board member Sergio Hernandez wondered if changes to the tests had impacted student scores. But staff said tests this year and last were virtually the same template.

The specter of statistical errors was raised, again shot down by staff and the lack of support for statewide tests was also floated. In the end, no excuse could undo the conclusion of the report that shows student outcomes went down instead of up in the past year.

So who to blame? Board member Rebecca Mendoza was quick to sympathize with teachers, insisting the outcomes were not their fault.

When asked, where does to buck stop, Superintendent Paul Goren acknowledged the buck stops with him. “The responsibility lies with me.”

He said after two years under his leadership of seeing student performance rise, scores took a turn for the worse this year. Ironically that is as the district enters the second half of a five-year strategic plan aimed at improving student outcomes across the board.

Goren adds, changes take time and the district is implementing a new approach to school improvement planning which will energize and empower educators to focus on root causes of student achievement. He said, “The proof will be in the pudding this year.”

The discussion about student outcomes will continue next week when staff presents an update on the strategic plan. The meeting will see some proposed staffing changes including a proposal to add a director of African-American student achievement. That’s a role some in the community have been demanding for some time.