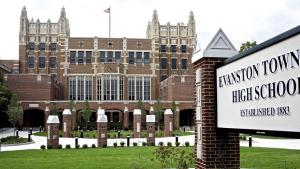 Evanston’s two school boards learned at their meetings last night that their budgets are balanced for this year and next, but to continue that trend in the future will not be easy.

Both boards also received projections that the actual revenues and expenses for the current school year were likely to be in balance as well.

But the good news ends there, particularly at District 65, which is looking at projected deficits of about $4.5 million in 2017-2018, increasing annually to nearly $10.5 million three years later.

Down the street at ETHS, finance officials are hoping to keep their string of 11 straight years of balanced budgets intact for the forseeable future.

Retiring chief financial officer William Stafford says he is projecting a minor deficit of less than half a million dollars for 2018, adding, “we expect to be able to propose balanced budgets for the next several years.”

Financial officials of both districts continue to warn their boards of any major reductions in state funding, especially if the state requires districts to assume the obligation of funding pensions for their employees, as they have threatened to do. This could add upwards of $2 million a year to the expense side without any offsetting revenue.

On the revenue side, property tax caps limit the increases in tax revenue to the rise in the Consumer Price Index, or 5 percent, whichever is less. The CPI has been less than 1 percent a year for the last two years, while many of the products and services purchased by the school boards, particularly teacher salaries, have risen faster than that.

The total amount of salary expenditures in next year’s District 65 budget, for example, is projected to increase by four percent.

To balance the budget for next year, District 65 proposes a reduction of some $570,000 in non-personnel expenses, such as repair and maintenance services, reduced curriculum supplies, reduced consulting services, and purchasing less school furniture.

While these are short-term budget-balancing strategies, school officials warn that rising costs threaten this as a viable strategy for future years.