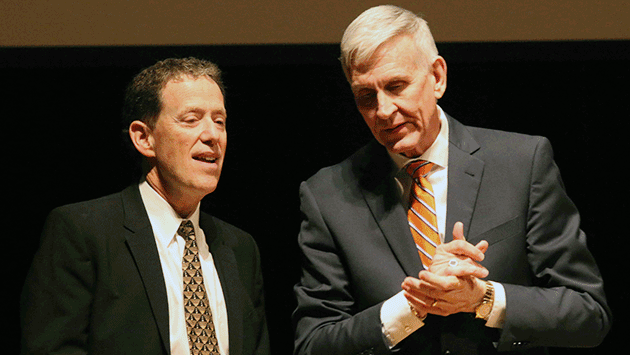 Hundreds of people turned out at the ETHS auditorium for what was billed as the first event of its kind in Evanston, bringing together the leaders of the city's two school districts for a joint report on the performance and goals of the elementary and high school districts.

The new PARCC, or Partnership for Assessment of Readiness for College and Careers, test, to be administered this spring, is a joint effort of a dozen states to come up with a better replacement for exam programs run by the individual states, including the Illinois State Achievement Tests.

The new tests have drawn fire from some parents elsewhere, and nationally syndicated conservative columnist Michelle Malkin, among others, has urged parents to "choose to refuse" to have their children take the exams.

District 65 Superintendent Paul Goren said, "I cannot condone opting out, but will be respectful of family decisions."

He said that under state law the schools have to offer the test and that District 65 would risk losing about $7 million in state and federal funds if it fails to do so — or nearly 7 percent of the district's entire budget.

"I can't run the risk of that money disappearing," Goren said. 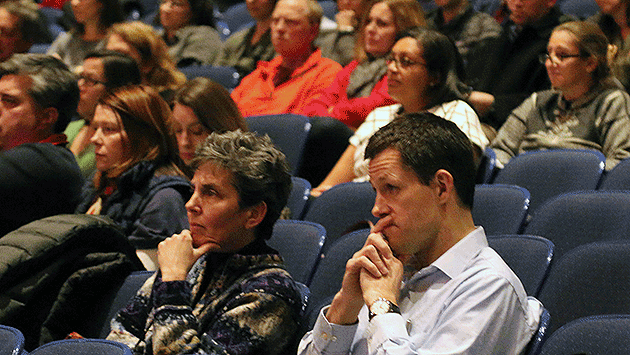 Listening to the superintendents.

Goren said he has a team of folks working to implement the new computer-based testing program. "But I worry about whether the assessments will be delivered in a timely manner from PARCC and Pearson," the commercial testing firm hired by the PARCC consortium.

He said the district will be doing "a test run" of the new assessments in a copule of weeks.

In response to a question about the cost of the testing program, Goren said that since District 65 has been running statewide standardized tests for years, the cost of administering the new program will be about the same as what has been spent in the past.

"But there is a bit of additional work, and I want to make sure we're ready," he added.

As for shifting the spending to some other purpose he said, that "a great assessment system" would deliver crucial information for teachers, administrators, families and kids.

Having that "would be a happy day," Goren said, "So I'm not adverse to having a robust assessment system that can provide that."

But ETHS Superintendent Eric Witherspoon said, "We're spending way too much. We have to disrupt the whole school more than in the past — two days off for PARCC."

"We'll have to train every staff member in the school. The person administrating the test has to unlock every student's computer for the test and lock it again," he added, and "if a computer screws up" a technician will have to be called to repair it.

"I can't believe we're being mandated to discrupt the education of children for a testing battery that I have questions how useful it's going to be," Witherspoon said.