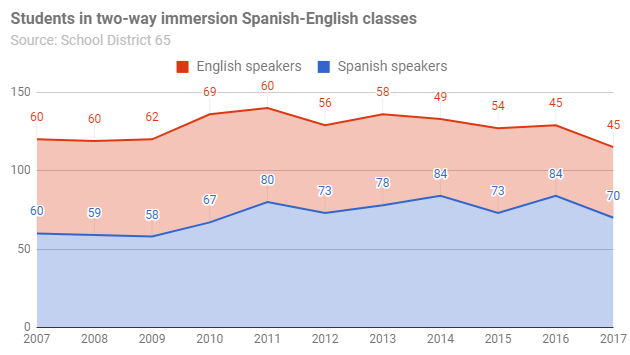 Should District 65 expand the number of Two-Way Spanish immersion classses in Evanston?  That’s the meaty topic on tap for Monday night’s school board meeting.

A report prepared for the superintendent and board members recommends adding at least two additional TWI classes.

The TWI program exists first and foremost to serve Spanish-speaking English Learners, who, the district’s policy says,should make up at least 50 percent of the TWI class. The other student are selected through a lottery process.  In the past few years the number of applicants for the program have far outstripped the available spots. Last year 140 students enrolled in the lottery for a TWI class, but there was room for only 59, or 42 percent of applicants.

The report to the board explains the TWI program works best when there is a 50/50 balance of native Spanish and native English speakers in the classroom.  However the population of Spanish-speaking students in District 65 is increasing and that has impacted the number of openings for English speaking students.

The challenge facing board members is figuring out where the new TWI classes should be offered. It’s currently available to students in grades K-5 at Dawes, Dewey, Oakton, Washington, and Willard.

The report outlines some of the issues that need to be considered when determining where the new classes should be held. Chief among the concerns is the fact the TWI class will replace a general education class and that could cause crowding in other areas.  Another concern is the low involvment of African American students. A third issue is the potential loss of some staff members.

The report urges the expansion be implemented by the next school year. In terms of preparing incoming kindergarten families that means the board needs to have a plan in place by January at the latest.

Monday’s meeting is one in a series planned to discuss the TWI expansion. Its focus will be if, and how, the program should be expanded. Next month the board will tackle where the new classes would be offered.

Monday’s meeting is scheduled for 7 p.m. at the JEH Education Center Board Room at 1500 McDaniel Avenue in Evanston.