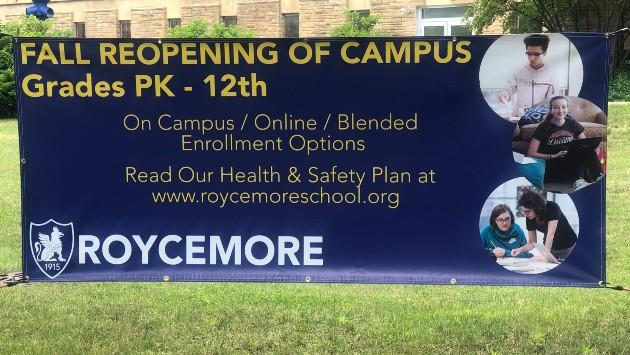 “It’s a great day to be a Wildkit.”  That’s how Evanston Township High School superintendent Eric Witherspoon ended an email sent this week to parents, students, and staff at ETHS.  But while it may indeed be a great day, it’s also a confusing one.

On Tuesday, Gov. J.B. Pritzker issued guidelines for the in-person opening of schools in late August.

Illinois schools closed their doors and went to remote e-learning in mid-March as a result of the coronavirus pandemic and the governor’s stay-at-home order.  But while the guidelines establish minimum standards for classroom health and safety procedures, it’s up to each individual district or private school to decide how and when to return to in-person learning for school year 2020-2021, if at all.

In his email, Witherspoon, who uses that “great day” line a lot, said, “Right now, we don’t have all the answers.”  He stressed the “urgent need” to tell families what to expect, adding ETHS anticipates releasing its own transition plan next month.

But chances of all of ETHS’s 3,700 students returning to campus at the same time seem impossible, if recent comments hold up. For example, at June’s virtual school board meeting, Witherspoon said “there aren’t enough six feets in every direction” for social distancing if everyone is in the building at the same time.  He suggested some degree of e-learning is likely for most ETHS students in the fall.

The state guidelines call for the use of masks. Symptom screening and temperature checks, or at least self-certification of being symptom-free, would take place before entering a school. Cleaning and disinfecting would be required, as would social distancing “whenever possible.”

Witherspoon’s email says ETHS staff are reviewing the state guidelines, and also are communicating with other high school districts and with Evanston/Skokie District 65. Evanston Now has reached out to District 65 for a comment, but we have not yet received a response.

Planning for a large district, like Evanston’s public school districts, is much different than readying a small school.  Roycemore School, with 220 students in grades pre-Kindergarten through 12 plans a classroom return, while allowing families who want virtual learning to have that option instead.

Some children “might have an immuno-compromised individual at home,” says Head of School Adrianna Finley Odell, and would worry about attending school and returning home with an illness.

However, she says “the majority of our students will be back on campus.” Because Roycemore is small, Odell says they can do more than what state health minimums require. Roycemore is limiting enrollment, so there will be no more than 15 students per class in grades 1-4. That easily allows for six-foot separation of desks in the classroom.

In addition, a rising senior at Roycemore has created an app where students (or their parents) can answer questions to confirm if a child is symptom-free.  The app generates a QR code which the student scans before entering school, speeding up the process of getting inside. Odell says Roycemore is willing to share the app with other schools

Catholic Schools in Evanston are also aiming for an in-person opening. In a video message to area Catholic school parents and students, Cardinal Blase Cupich said the “decision to aggressively plan for reopening our schools this year is based on the value we place on face to face instruction.” Cupich said parents should be confident that all possible safety measures will be taken, but virtual learning will be available for those who want it.

Evanston has two Archdiocesan elementary schools in Evanston, Pope John XXIII and St. Athanasius and an independent Catholic elementary school, The Academy at St. Joan of Arc., is located in the Skevanston section of Skokie.

St. Joan of Arc spokesperson Caroline Kennedy says they’re planning to be on campus for the first day of school, Aug. 24, and “we believe we can achieve that.”

The 180-student academy is controlling enrollment to help ensure health and safety. Kennedy says there will be staggered arrivals and departures and limits on the number of children in the hall, among other measures.

The school is also planning virtual learning for any students who may need to isolate and quarantine. Every student had a computer for e-learning when academy closed its doors in mid-March.

And that’s perhaps the biggest concern at all schools, big and small … having to close their doors again.

The state guidelines put it this way:  “Schools and districts should also prepare for a return to remote instruction in the event of a resurgence of the virus or a second wave of it in the fall.”

Should that happen, it would not be a “great day to be a Wildkit,” or anybody else for that matter.