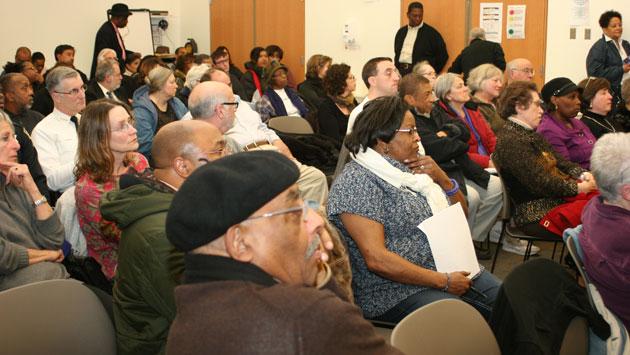 A $48 million school construction referendum on the March election ballot drew praise and criticism from residents at a 2nd Ward meeting on Evanston's west side.

"The reason I got out of poverty is education," Paden said, "But I'm old now and don't have as much money as I used to have, and I think old people should have the right to live on the little money they have left."

Lindsay Percival, the executive director of the Child Care Center of Evanston, said she was concerned about possible cost overruns on the project.

She said the District 65 administration building, where the Thursday night ward meeting was held, was orginally supposed to have cost $5 million, "but it ended up costing a lot more than that."

School Board member Jerome Summers responded that building costs and interest rates are lower now than they've been in a very long time, but he said he wasn't prepared to respond to a question from Percival about whether the board would cap project spending at the $48 million requested in the referendum.

Cindy Leavitt, of 1645 Church St., said that although her children are now grown, she favors the referendum because she believes all children should have a neighborhood school they could walk to.

Jennifer Kyrias of 1117 Darrow Ave., a District 65 teacher, said she was concerned that the district won't have enough money to staff the schools it has now, let alone a new school.

"It's a big concern with all our teachers," Kyrias said, "We need to look at sustainability, at supporting what we have in place already."

But Madelyn Ducre, of 1929 Foster St., said she plans to vote for the referendum "although it's going to break me taxwise."

Summers, who's pushed for a new school in the 5th Ward on the city's west side for years, now is barred by state law from advocating as a board member for the referendum now that it's on the ballot.

But he suggested a vote for the referendum would "keep Evanston on the cutting edge of equality and justice, as the city has been for over 150 years now."

In addition to building a new elementary school in what the board describes as the "central core" of Evanston, the referendum would also fund additions at the district's middle schools.

Top: About 100 people turned out for the 2nd Ward meeting.