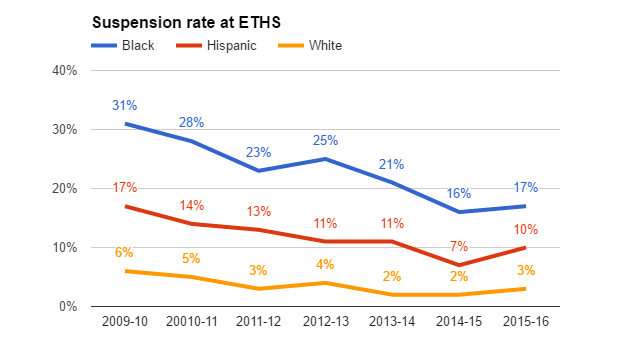 The number of suspensions at Evanstion Township High School has declined dramatically in recent years, but black and Hispanic students are still suspended at higher rates than whites.

“ETHS is fully aware that a disproportionate number of black students are suspended, and we believe the school to prison pipeline is real,” ETHS Principal Marcus Campbell told the school board Monday night. “We are putting a number of things in place to address these disparities.” 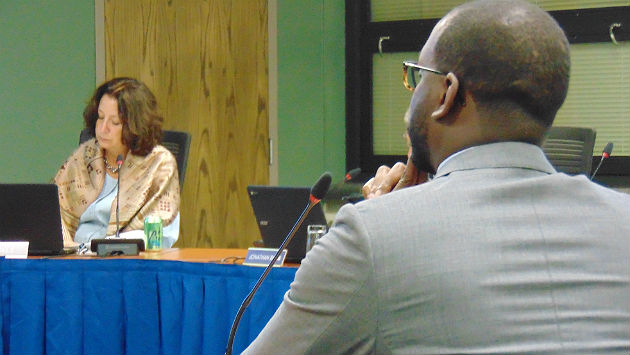 Principal Marcus Campbell addressing the board.

Campbell said ETHS faculty is not only looking at suspension and referral data, but is also looking at what faculty can do to address these disparities and using restorative justice programs in place of suspension. Black female and black male summit meetings with students will also be held this week to get the perspective of black students, he added.

“We are being honest with ourselves regarding the narrative that depicts black children as overly aggressive and hostile,” Campbell said. “We know that this isn’t the case, but we’re working with staff to understand the disconnect that some of our students are having in school.”

In addition to these efforts, Board Vice President Monique Parsons called for a breakdown of punishable offence and punishment by race, IEP status, and income level.

“I recognize and I appreciate the percentages that you’ve shared and it shows we’re moving in the right direction,” she said. “But when we can see how our kids are performing or how they’re being handled by subgroup, it just gives another sense of urgency.”

Board President Pat Savage-Williams said that while she appreciates the strides that have been made, she still sees a lot of work to be done.