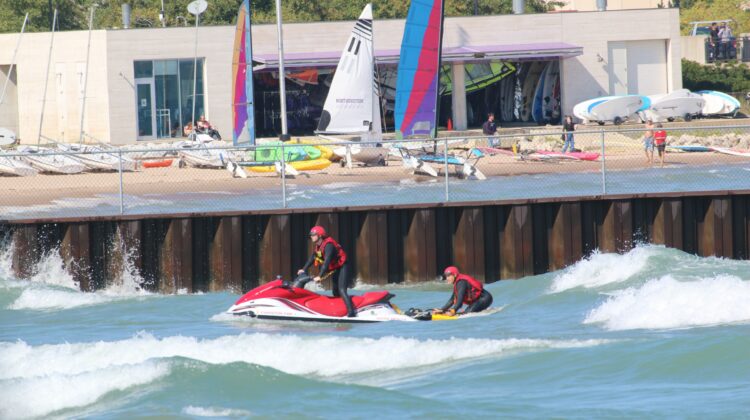 Firefighters on a WaveRunner search for the missing swimmer.

Fire crews from Evanston and several surrounding communities were searching Saturday afternoon for a swimmer missing off the breakwater at the Church Street boat ramp.

The search for the swimmer was launched shortly after 2 p.m. — just as crews were completing the rescue of three boaters who’d been in distress in the water — an incident that was first reported shortly before 1 p.m.

Those three people have all been transported to Evanston Hospital.

The swimmer — based on surveillance video of the scene viewed after his disappearance was reported — apparently went into the water sometime around 12:50 p.m., entering from the rocks on the north breakwater of the Church Street boat ramp.

He swam for a while, but the video showed that he then went under the water’s surface and didn’t come back up. Heavy wave action has made the search difficult.

Fire crews from a large number of departments — including at least 13 divers, some from as far away as Schaumburg — have responded to the scene along with a Coast Guard unit, Chicago Fire Department helicopter and a drone from one of the responding departments.

The search for the swimmer had begun after some clothing containing his identification was found along the shore.