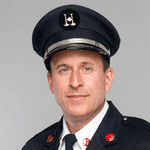 The promotion is effective Monday, March 24.

Klaiber noted that with many retirements in recent years, more than half the city's firefighters have less than a decade on the job.

Scott joined the department in December 1999 as a firefighter/paramedic.

He was promoted to captain in 2006 and was co-chair of the department’s training committee a dive team member and is past president of Evanston Firefighters Local 742.

He is currently a field instructor for the Illinois Fire Service Institute in Urbana-Champaign and is enrolled in the executive fire officer certification program at the United States National Fire Academy.

“Division Chief Scott possesses the experience, leadership and vision to bring a constructive and positive culture of training and professional development to the members of Evanston Fire & Life Safety Services," Klaiber added.