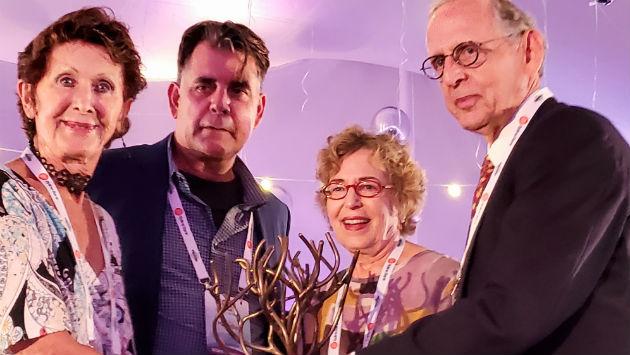 “Chuck and Penny have given so much for the betterment of our community; they even have a key to the city,” said MashUp co-founder Patrick Hughes Jr. “Their work with the McGaw YMCA, the Second Baptist Church of Evanston, and the Golden Apple Foundation makes up only a part of the list. They more than embody the values of our city, and they fully deserve this honor from the combined Evanston and Northwestern communities.”

Sebring serves on the Policy Advisory Board for Northwestern’s School of Education and Social Policy and the board of directors for the Chicago Public Education Fund. Lewis is chairman of the Lewis-Sebring Family Foundation.

In 2012, the Spirit of Evanston Award was renamed to include the name of Corrine Passage, paying tribute to one of Evanston’s business and philanthropic leaders and one of the founders of the MashUp.

Evanston Mayor Steve Hagerty and Northwestern President Morton Schapiro serve as co-captains of the event hosted by Northwestern in coordination with the City of Evanston, the Evanston Chamber of Commerce and other business partners.

A portion of the proceeds benefit the Evanston Chamber of Commerce, promoting and growing business in the community. This year’s “ChowDown at the MashUp,” featured more than 30 local creators of food and drink.