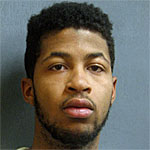 Evanston police say they've made a second arrest in the armed robbery of a Sarpino's pizza delivery driver.

Kent G. Morales Jr, 18, of 733 Brummel St., now has been charged with a misdemeanor count of theft in the Sept. 8 incident.

Another suspect , Terrell L. Farmby, was arrested and charged in the case last month.

Police say the robbery happened about 3:15 a.m. in the 800 block of Dobson Street when two men, armed with a knife, stole two pizzas from the driver.