A second development team is about to unveil a condo tower proposal for Evanston's Fountain Square. 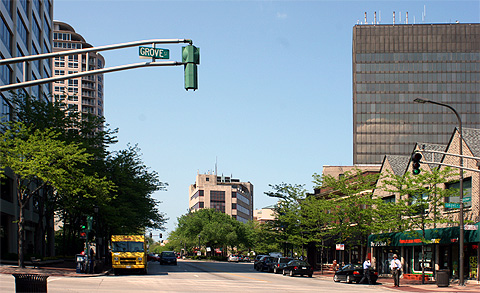 Viewed from a block away at Grove Street, the existing Fountain Square Building is dwarfed by its neighbors, the Rotary International Building, Sherman Plaza and the 1603 Orrington building.

Developer Bob Horner confirmed today that his team will present their plans at an executive session of the Evanston City Council Monday night.

Mr. Horner said he didn't want to discuss details of the project in advance of the meeting with the aldermen. "I want them to hear about it first rather than read about it in the newspaper," he added.

He said the secret meeting with the council was appropriate because the project involves changes to the city-owned Fountain Square plaza.

Mr. Horner said his proposal would involve redevelopment of the Fountain Square building at the south end of the block and the Hahn Building at mid-block.

The first proposal for the block, from developers Tim Anderson and James Klutznick, was revealed last month. It calls for a 49-story tower on the site of the 708 Church St. building at the north end of the block. Anderson and Klutznick developed the recently-completed Sherman Plaza complex just west of Fountain Square.

Persons who've been briefed on the Horner proposal who asked not to be identified by name say the plan calls for a mixed-use commercial and residential building about 35 stories tall.

The new proposal reportedly would include the developers paying for improvements to the city-owned plaza. The first tower plan argues the city should use property tax revenue to demolish the Fountain Square building and enlarge and rebuild the plaza.

The sources said the latest proposal would include new construction set back from the lot line over the landmarked three-story Hahn Building and that the building itself would be preserved.

Because the two tower proposals involve separate land parcels, it's conceivable the city could approve both. City officials, struggling with how to fill a nearly $100 million shortfall in police and fire pension funding, may welcome the new tax revenue stream the projects would provide, as well as a source of funds to rebuild the decaying Fountain Square plaza.

Sources say the two development teams may seek to coordinate their proposals, but that such discussions are only at a very preliminary stage.