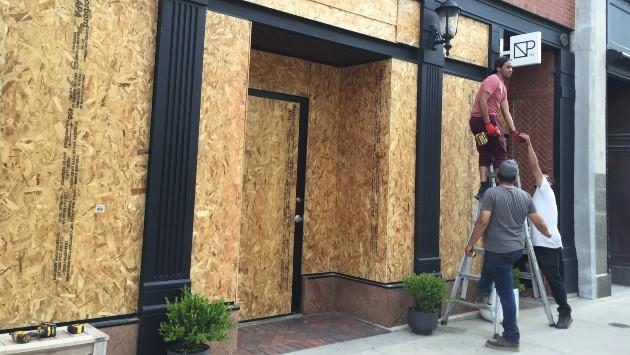 Even though there’s been little evidence of vandalism and no looting in downtown Evanston, nervous owners ordered board up crews to cover over the windows of at least three businesses late this afternoon.

Koi Asian Cuisine, Newport Coffee House, and Blick Art Materials all have plywood where glass used to be.  Koi and Newport are next door to each other in the 600 block of Davis Street, Blicks is in the 1700 block of Maple Avenue.

An employee at Koi tells Evanston Now it was the landlord’s decision, not the restaurant’s, to put up the boards. Koi is still open for pickup. The employee says Newport also has the same property owner.

While Blick is boarded up, it also has a sign on one of the boards saying curbside pickup is still available.

Earlier today, the downtown Target store re-opened. That store was closed yesterday to board up the windows. The Howard Street Target also re-opened.

The Howard Street store is in the same shopping Plaza as the Best Buy, which was looted over the weekend and remains closed.

Two of the four entrances to the shopping center are blocked, one by a dumpster and the other by a garbage truck.

Target closed 175 stores nationwide after its Minneapolis store was vandalized and looted as protests over the death of George Floyd in that city turned violent.