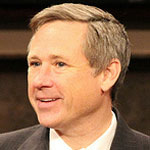 U.S. Senator Mark Kirk of Illinois was operated on today after suffering a stroke over the weekend.

Doctors at Northwestern Memorial Hospital, where Kirk was transferred after checking himself into Lake Forest Hospital on Saturday, say the senator suffered a stroke on the right side of his brain — which is likely to affect his ability to move his left arm and likely his left leg.

Kirk, 52, is divorced and lives in Highland Park.

Kirk's office issued a statement saying, "The surgery was successful. Due to his young age, good health and the nature of the stroke, doctors are very confident in the Senator's recovery over the weeks ahead."

A Republican, Kirk captured President Barack Obama’s old U.S. Senate seat in a close 2010 election against Democrat  Alexi Giannoulias. He has sought to maintain a position as a political moderate in what's become a highly partisan atmosphere in Washington.