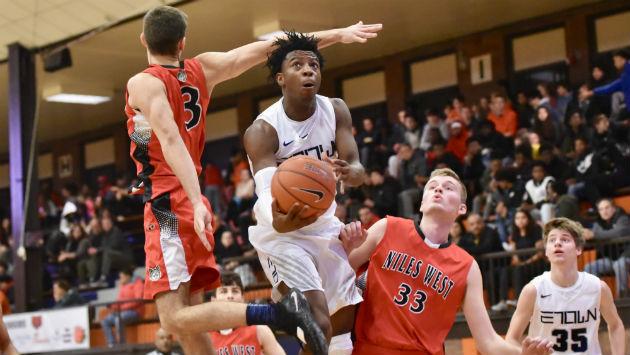 Basketball coaches who embrace the tradition of Senior Night and start as many seniors as possible in front of the home crowd one last time usually have to put up with ragged play because of nerves, or because players are on the court with players they’re not used to in game situations.

But the payoff comes when someone tosses in an unexpected 3-pointer or scores his first varsity points, or maybe contributes a blocked shot for his own personal highlight video.

Evanston enjoyed the best of both worlds Friday night at Beardsley Gymnasium and got an unexpected bonus as a 63-48 thumping of Niles West enabled the Wildkits to clinch a tie for the Central Suburban League division championship.

Evanston guard Ian Alexander (25) splits the Niles West defense on his way to the basket.

The win wasn’t unexpected against a squad that hasn’t won a conference game this year, but the victory just figured to set up a winner-take-all showdown with rival New Trier next Friday on the Trevians’ home floor.

But just like last year, Niles North upset the Trevs 44-40 and now the Kits (24-4 overall, 8-1 league) can’t do any worse than tie for their 5th straight conference title.

Evanston’s guards made life miserable for the Niles West backcourt and registered a total of 19 steals in front of an appreciative home crowd. The Wildkits will still have one home game remaining, as they’ll likely host the CSL crossover championship game on February 20th.

That will give senior Lance Jones one last opportunity for a dunk in a game in Beardsley Gym. He achieved that personal goal as both a freshman and a junior, but misfired on a jam in the third quarter of Friday’s win.

He still netted a game-high 15 points, the only Wildkit in double figures as head coach Mike Ellis spread out the playing time. Jones was the only regular starter to answer the opening tip along with classmates Ian Alexander, Ben Tarpey, Jalen Christian and Thomas Neumann. Jones was also credited with a team best 5 steals and a couple of blocked shots.

Next best for the winners were Ryan Bost and Jaylin Gibson with 8 points apiece. Alexander scored a career-high 5 points and Christian (7 points) fired in his first 3-point basket of the season in the first quarter.

“This is basically my last night here in an Evanston jersey,” said Jones, “and I had some jitters in the first quarter. “But then when I came back in I settled down and found my game. I’ve had a lot of good coaches here and it’s been great.”

Niles West (9-16, 0-9 CSL South) actually led 14-12 at the first quarter stop as the hosts were out of sync, typical of many Senior Night contests. West’s last lead came at 17-15 on a 3-point bucket by Kevin Guillame, but Evanston responded with an 8-0 run as Jaheim Holden connected on a pair of mid-range jump shots and Gibson and Jones also contributed baskets.

Alexander had the rare experience of finishing what he started, as he was on the floor in the final seconds of the sixth straight win for the Wildkits. “I’ve been playing with most of these guys since I was in 6th grade and it was great to be out there at the end,” he said. “The great thing about tonight was seeing our teammates show the love for each other,” added Neumann.

Jalen Christian of Evanston (21) rises up for a shot against Niles West defender Haris Mackic in Evanston’s 63-48 win Friday night.

Tarpey was just happy to be there in the lineup after spending part of Thursday in the hospital, dealing with a bout of pneumonia. He missed both free throw attempts in a technical foul situation in the fourth quarter, but did force a couple of Niles West’s 28 turnovers with his defense.

The football quarterback who led ETHS to its best regular season in 20 years in the fall, Tarpey is still weighing his college options and is planning an upcoming visit to Miami of Ohio. He said growing up in the Kit cage program, he knew there was a lot of talent in the senior class.

“We all played together in feeder and AAU, so I knew we had a lot of talent coming up,” Tarpey said. “Then Jaylin (sophomore Gibson) came along and passed up some of the older guys and really became a big factor. Out of the blue Blake Peters came from Highland Park, and we got Louis (Lesmond) from France. We knew we’d have a lot of talent, but not THIS much.”