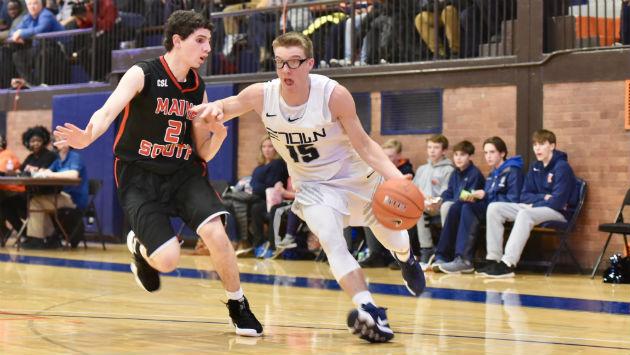 A flu bug cost two starters for the Evanston basketball team — Jaheim Holden and Jaylin Gibson — a few missed practices this week and neither one started Friday night, per team rules.

But the Wildkits were able to at least avoid the upset bug for the second straight week, holding off Maine South for a 54-52 overtime victory in their home opener at Beardsley Gymnasium and securing their first Central Suburban League South division win.

Holden again proved that old adage about it’s not if you start, it’s if you finish that’s most important, scoring 5 key points in the overtime session. Classmate Ryan Bost converted 4 straight free throws in the last 21 seconds and Lance Jones tallied a game-high 16 points along with 5 steals as the seniors applied the finishing touch for ETHS, now 6-1 overall and 1-1 in league play.

Lance Jones of Evanston (5) glides in for a layup for two of his team-high 16 points.

Maine South, which trailed by 16 points early in the third quarter, fell to 3-3 overall and 0-2 in the CSL South. The Hawks only scored 5 field goals in the entire first half but a sluggish second half by the hosts kept them close enough to actually take the lead in the final period.

In fact, the Hawks had a chance to win in regulation but Dan Crane missed underneath with 4 seconds left.

“Our seniors — Ryan, Jaheim and Lance — closed the game out with their execution and that was big for us,” Ellis said. “When you’ve got seniors on the floor, and they realized it was a (close) game, it became very important for them to start playing the right way. We played some really good basketball tonight, but you have to play that way on every possession for a full 32 minutes. We get our best shots when we play through each other, that’s when we’re hard to guard, but we had too much individual play when we got off track in that one stretch in the third and fourth quarters.”

The hosts went scoreless for more than 4 minutes in the fourth quarter and saw a lead that was once 16 points (33-17) melt away to a 39-35 deficit.

“We scrapped and played hard and we played very well in the first half,” Ellis explained. “But we didn’t respect Maine South enough. We let our guard down and we didn’t do the little things. Maine South is a team you HAVE to respect. They’re so well-coached and so well-disciplined that you know they’re going to be in every game. They play hard, and they play together, and that’s what allows you to hang on in a game for an extended period of time.”

Holden’s heroics actually started when the Kits fell behind at 39-35. After scoring just 2 points in the first 3 quarters, he hit back-to-back shots to pull ETHS within 43-41 with 2 minutes, 18 seconds left in regulation. Jones recorded a steal in the lane 45 seconds later, then drove to the hoop to tie the score at 43-all with 1:14 to play.

Holden fired in a 3-point shot to start the overtime scoring, and his fast-break layin after Blake Peters wrestled the ball away from a Maine South ballhander to trigger that transition opportunity sent the Wildkits ahead for good at 50-45 with 90 seconds left.

Bost sank 4 straight at the free throw line for an insurmountable 4-point edge.

“He was feeling it at the end, and after Ryan made the first 2 we talked about getting the ball back into his hands,” the coach said. “Ryan plays with a lot of confidence and a swagger, and him knocking in those free throws was really big for us.”

Evanston limited the losers to just 37 percent (17-of-46) shooting from the field and forced 21 turnovers. South had more turnovers than points for most of the first half and trailed 28-15 at the halftime intermission.