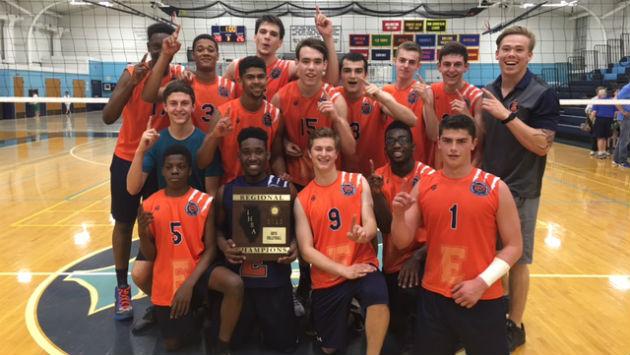 Like most of their classmates, Evanston seniors Isaac Sageman, Evan Lindley, and Charlie Knepper are ready to move on with their lives after last Sunday’s graduation ceremony at Northwestern University.

But the trio proved Wednesday night that they’re not done providing senior moments — and refusing to lose.

Two points away from a season-ending loss to Loyola Academy in the third set at the Prospect Regional tournament, the Wildkits somehow found a way to win and rallied for their first regional championship since the 2008 season.

Coach Mike McDermott’s squad defeated the Ramblers by a 24-26, 25-17, 28-26 margin behind crucial plays down the stretch by some seniors who earned a chance to play once more on the Beardsley court. Evanston will host the sectional semifinals and finals and the Wildkits will find out if the fifth time is the charm when they meet a New Trier team that they’ve already lost to four times this season.

The two rivals will meet Friday at ETHS at 5:30 p.m., with the Glenbrook North versus Maine South matchup set for 6:30 p.m. The survivors will return next Tuesday for the sectional title contest at 6 p.m.

Evanston, now 26-11 overall, trimmed the Ramblers for the 2nd time this season, but had to do it the hard way. The Kits trailed 22-18 and 23-20 in the third set and couldn’t gain any offensive traction against a Loyola defense that seemed to have the answer for everything except Lindley (17 kills).

But three consecutive hitting errors by the Ramblers gave the No. 4 sectional seed Wildkits new life, and Knepper hammered down a kill from his outside hitter slot that actually pulled them into a 24-23 lead. The two teams exchanged the lead after that before Lindley finished off the come-from-behind victory with a kill that trickled off a Loyola defender at the net.

The Evanston senior southpaw was hoping for a highlight-film type of kill to decide match point — but wasn’t about to ask for a recount.

“I wanted to do what Charlie did a couple of times, and pound the ball off of somebody’s chest, but obviously a kill is a kill and I’ll take it,” grinned Lindley, who also contributed 4 blocks. “I know someone might look at the beginning of the season when we were 9-1 and think, oh, they’ll win a regional. But we haven’t done that in a long time here and it’s awesome to accomplish something like this. We’re doing things this year we haven’t done in a long time, and it’s fitting and it’s exciting that we get a chance to play in the sectional now.”

“Those seniors really dug down deep tonight,” McDermott said. “They had to lay it all out there on the line. When I called that timeout (trailing 22-18) I said just focus for the next 11 minutes — it was a guess because 11 is my favorite number — and you’ll get what you want. They went back out and took care of business.

“This is the first high-pressure match that a lot of them have played in, even though we’ve won a lot of close matches this year. Our focus today was on faith, not fear. They believed in each other and they didn’t fear what the outcome would be. They were confident there at the end and, if anything they actually stepped up their play at that point.”

Sageman put down 11 kills and added 4 blocks for the winners, but his most important contribution may have come at the service line. The 6-foot-6 senior middle hitter isn’t exactly known for consistent serving, but he connected on 4 straight jump serves with the season on the line, giving the Kits a chance to rally.

Knepper added 6 kills and junior setter Shane Waterloo was credited with 35 assists.
Plagued by a sinus infection and a bad cold over the past 2 weeks, Lindley wasn’t feeling 100 percent physically even after the biggest win of his high school career.

“It’s weird the way I feel right now,” he said. “I’ve never felt so exhausted during a volleyball match. But I’m really excited to be able to do this with the way I’m feeling. I got some blocks against their freshman (6-3 budding star Jack Howard) because I was able to adjust to their tool shots tonight. That’s how I got 2 or 3 of those solo blocks.

“Their middles weren’t pressuring us much, so that helped. That No. 31 (Howard) will be a stud when he’s a senior, but as a senior I had to put him in his place tonight. He’ll be an amazing player when he gets older.”

Evanston had to cope with adversity at the end of the first set when junior Zach Gayle was whistled for a rare violation — delay of game — as he stood at the service line. The call came with ETHS on top 24-23 and re-tied the game, and the Ramblers mustered the last two points on a block by John Bouchard and Sageman’s hitting error.

“All I’ll say about that call is that Zach took the same amount of time he always takes,” said McDermott. “That was a huge momentum changer, but we learned from it and we adjusted. We knew we had to be resilient as a team tonight.

“It’s awesome the way all of the spring sports teams are getting the job done at Evanston this year. I think we match up well against all of the teams left in the sectional, even the ones (New Trier and GBN) seeded above us. And it’s great to get another chance to play at home.”