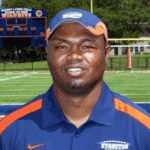 Funeral arrangements, and a Fourth of July parade tribute, have been announced for Evanston Township High School assistant football coach Steve King, who died Friday while working out at the McGaw YMCA.

A memorial service will be held Saturday, July 5, at First United Methodist Church, 516 Church St. in Evanston.with a family hour at 10 a.m. and the funeral at 11 a.m.

ETHS Football Coach Jacob Rohde says the school's football team will honor Coach King when they march, as they do every year, in  the Fourth of July parade Friday.

"We will come together as a family, in support of the King family and each other, as we celebrate the life of one of our most beloved coaches," Rohde said.

All current and former ETHS football players who were touched by King are invited to gather at 1:15 p.m. on July 4 at Bent Park, Rhode said, to march in the parade and remember a man who devoted his life to fostering the growth of Evanston youth.