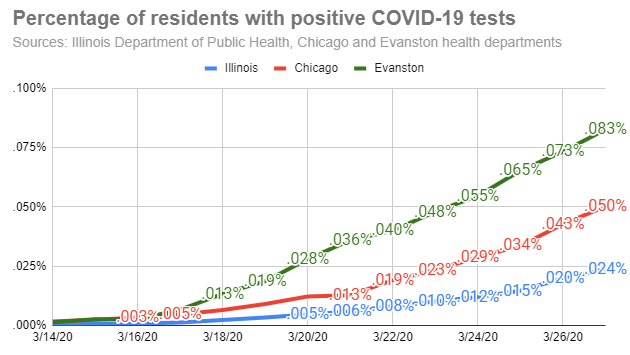 Skokie reported five new cases for a total of 56. That places the village’s COVID-19 infection rate — the percentage of the population that’s been confirmed to have the disease — at .088% slightly above Evanston’s rate of .083%

Those rates are substantially above the rate for the City of Chicago and the state as a whole.

However, health officials in Lake County are reporting higher rates even than those in Skokie, with Lake Forest having a confirmed infection rate of more than 0.15%, meaning roughly one in every 670 people has a confirmed case of the disease.

Rates in Highland Park and Deerfield are also higher than those in Evanston.

Officials have speculated that residents of those communities may be more likely to be international travelers and also have more access to health care services that most Illinois residents.

Evanston and the City of Chicago reported no new deaths today, but Skokie reported one new death, raising its total to two. Statewide there eight new deaths for a total of 34.

At his news conference this afternoon, Gov. J.B. Pritzker praised the passage by the U.S. House of a $2 trillion emergency aid package and said he would work with federal officials to bring as much of that money to Illinois as possible.

He continued to criticize what he said were delays by the federal government in recognizing the seriousness of the pandemic and emphasized efforts by the state to provide shelter for the homeless and assist other vulnerable populations across the state to get through the crisis.

He said he hasn’t yet decided whether to extend the stay-at-home order he issued beyond its scheduled April 7 end date and encouraged residents to continue to shelter at home as the best available way to reduce the severity of the epidemic.

He said the state’s ability to test for the disease is growing, but is still far short of what’s needed to be able to fully assess the severity of the crisis and be able to make a better informed judgment about “when we’re getting to a better place.”