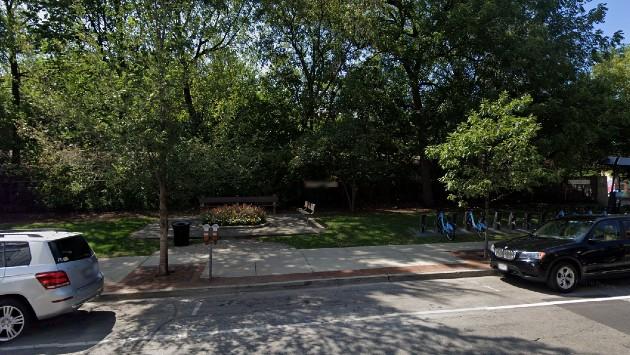 Evanston city staff Wednesday approved seven more sidewalk cafes for restaurateurs struggling to recover from pandemic-induced restrictions on their service and discussed plans for a brewery to open a patio operation in a city park.

Stetchbook Brewing owner Shawn Decker is asking to be able to serve beer in St. Paul Park, located just across the street from the craft brewery’s site at 821 Chicago Ave.

Decker told the city staff members during a virtual meeting Wednesday aternoon that he’s working with nearby restaurants to provide food delivery to the patio, which is planned to have about nine picnic tables on the grass in the park and a sales tent on the paved space near two existing park benches.

The staff discussed issues ranging from the height of a temporary fence to provision of a portable toilet but seemed inclined to move forward with the plan once additional details are worked out.

The Farmhouse sidewalk cafe as it looked in 2018. (Google Maps)

Farmhouse owner T.J. Callahan said his business is down 75%. “We’re hanging on by our fingertips trying to stay in business here,” Callahan added, as he asked staff to expedite his request.

City staff members raised concerns about keeping a clear path for pedestrians using the rubberized handicap walkway strip just south of the building, but decided they could work that out in discussions after the vote to approve the overall cafe plan.

Other restaurants winning approval for outdoor dining plans were: