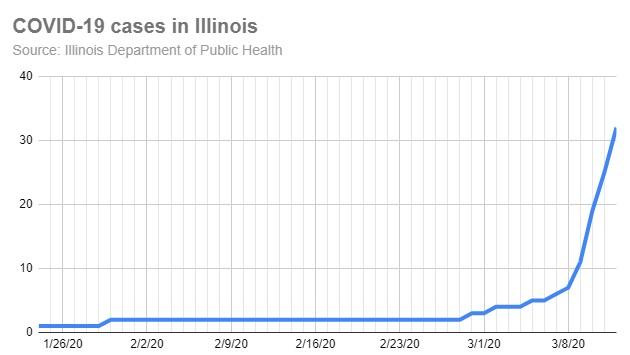 State officials announced seven new COVID-19 cases in Illinois at a news conference late this afternoon, and Gov. J.B. Pritzker said he’s ordering that all events in the state through the end of April that would attract 1,000 or more people be canceled immediately.

Pritzker said he’s also strongly encouraging that events that would draw between 250 and 1,000 people be canceled or postponed until at least May 1.

Even for events that would draw fewer than 250 people, the governor said, “It’s critically important for organizers to think about who’s likely to attend.”

If the group is likely to include a large number of elderly people or those with underlying health issues, he added, “please consider canceling.”

Gov. J.B. Pritzker speaking at this afternoon’s news conference at the Thompson Center in Chicago.

The new cases announced today include two Chicago residents — a woman in her 40s and a male child.

There were also three cases elsewhere in Cook County — two women in their 70s and a man in his 50s — as well as a Kane County woman in her 70s and a McHenry County man in his 60s.

City of Evanston officials have said that none of the cases reported so far involve Evanston residents, although one person whose illness was diagnosed earlier this week attended the Unitarian Church in Evanston.

Illinois Department of Public Health Director Dr. Ngozi Ezike said so far there have been no deaths of Illinois residents from the coronavirus and the majority of victims are recovering. The vast majority are in isolation either at home or in hospitals.

She said about 29% of the Illinois cases are travel-related and 44% are the result of contact with another known COVID-19 case. But the rest “do not have a clear connection and could be the result of spread in the community.”

Pritzker said the state is not ordering school closings at this time, but is strongly discouraging large school assemblies or sporting events that would attract crowds of more than 250 peole.