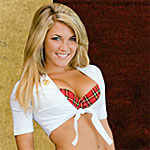 A proposal to open a Tilted Kilt bar and restaurant in the Fountain Square Building downtown is back on the agenda of the Evanston Liquor Control Board for a meeting next Tuesday night.

The proposal drew opposition based on concerns about traffic congestion and sexism when it was first presented to the board in December.

The owner of the building at 1601 Sherman Ave., Ted Mavrakis, said he would be the franchisee for the bar, and that he's operated a Giordano's restaurant with a full liquor license in downtown Evanston for 28 years "with not one single violation."

The Tilted Kilt chain features burgers and other pub food in a decor meant to resemble an Irish or Scottish pub, with waitresses the company calls "cast members" who follow a dress code exemplified by the picture here, from the company's website.

Alderman Jane Grover, 7th Ward, said at the December meeting that her only knowledge of the business came from looking at its website.

"But from what I see on the website, I would probably not take my family there," Grover said.

She said it appears the business exploits young women, and only hires women who fit a certain physical type for its waitstaff.

The first floor of the building, which looks out on the Fountain Square war memorial, has been vacant for nearly two years, since Prudential Preferred Properties acquired Rubloff Residential real estate and moved into Rubloff's office across the street in Sherman Plaza.

The liquor board meeting will be held at 6 p.m. in room 2200 of the Civic Center.