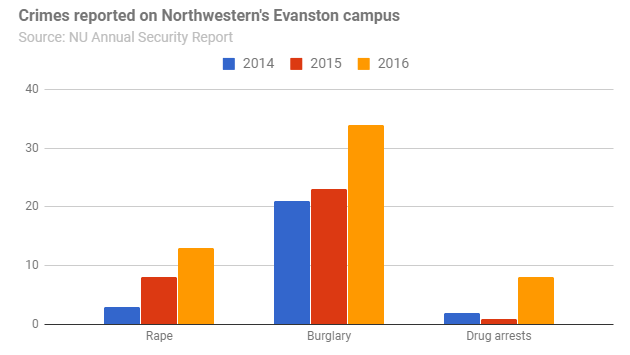 The annual report the school is required to produce each October under the federal Clery Act shows reported rapes increased 62 percent last year to 13 from 8 in 2015. Burglaries increased 48 percent, from 23 ot 34. And drug law arrests rose from 1 in 2015 to 8 last year.

There were also sharp increases in reported rapes and burglaries on Northwestern’s Chicago campus.

Campus crime data for 2015 compiled by the federal Department of Education show that the rate of rape and burglary reports at some large schools in the region — like DePaul University and the University of Illinois — were roughly similar that year to those at Northwestern. Comparison figures for 2016 weren’t yet available.