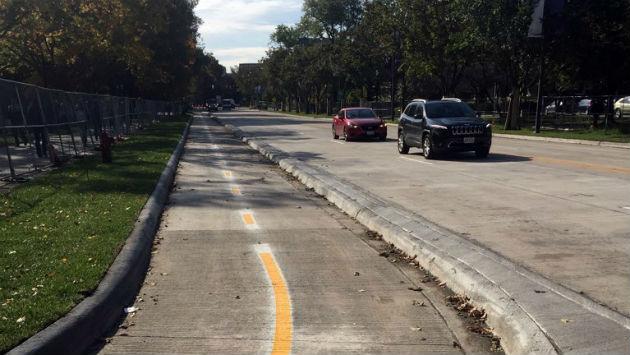 All northbound and southbound lanes have been reopened to traffic. The new two-way bike lane, from Davis to Lincoln Streets, is also open, with final pavement markings expected to be completed today. The sidewalk on both the east and west sides of Sheridan Road is open to pedestrians.

Crews are scheduled to remove the chain link construction fence along Sheridan Road by the end of this week, beginning at Lincoln Street and continuing south.

At Wednesday night’s Transportation and Parking Committee meeting the committee voted to recommend that the repaved portion of Sheridan, from Lincoln Street to South Campus Drive, be permanently designated a truck route.

The rebuilt roadway, with its concrete base, will be able to handle the load, Public Works Agency Director Dave Stoneback said, and the designation will help reduce truck traffic on Sherman Avenue and on east-west streets that link Sherman to the campus.

The Sheridan Road construction project is scheduled to wrap up next year with improvement to be made from Lincoln Street to the intersection with Ridge Avenue and Isabella Street.