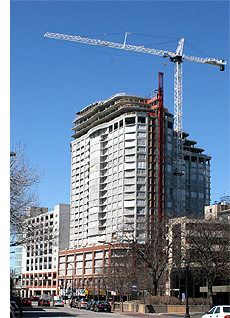 Assistant City Manager Judy Aiello told the city’s Economic Development Committee at its last meeting that the parking garage should be ready to open sometime in May.

The actual opening, she said, may be delayed until June, because the city is in the midst of negotiating a new contract for management of its two existing garages as well as the new one.

The existing garages are managed by different firms now, she said, and the staff expects to bring the new management contract involving a single firm to the City Council for discussion April 11.

Ms. Aiello said staff plans to start the new vendor out on the existing garages and then expand to the new garage once it’s ready for use.

Almost all the condos in the project are sold, she said, but the developer is still considering proposals for one remaining large retail space at Davis and Sherman.

Condo occupancy is expected over the summer, she said, with retail store openings starting in late summer or early fall.