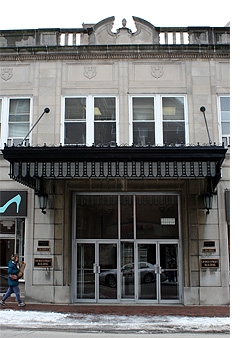 Jim Nash of Farnsworth-Hill, Inc., which managesÂ 708 Church, confirmed today that "there is a deal out there" to sell the building, but refused to provide further details.

Mr. Nash denied reports that he was refusing to renew tenants' leases, but said only that renewals would not be "at the same terms and conditions."

Leon Robinson, who owns the landmark Hahn Building next door, said he'd been approached by a tenant at 708 Church who showed him a notice the tenant had received from Farnsworth-Hill saying that if tenants wanted to continue their leases beyond the end of this year, they would have to negotiate with Focus Development.

Mr. Robinson said he has not agreed to sell the Hahn Building and that he was not sure whether Ted Mavrakis, who owns the Fountain Square building, the third property on the block, had been approached by Focus.

Calls to Tim Anderson of Focus Development and to Mr. Mavrakis were not immediately returned this afternoon.

Last June local developer Thomas Roszak unveiled plans for redeveloping the entire Fountain Square block. His plan featured a 38-story tower. But Mr. Roszak did not gain control over any of the three properties on the block.

Mr. Robinson said he'd never heard about the Roszak plan until after he started getting calls from worried tenants who'd read published reports about it.

He said Mr. Roszak later did offer to buy the Hahn building, but that they were unable to reach agreement on terms.

Since this story was first published we've heard from Tim Anderson of Focus Development Inc. who saysÂ his firm and its partner on the Sherman Plaza project, Klutznick-Fisher Development Company, are considering a redevelopment of the 708 Church St. site but "haven't submitted any plans yet" to the city.