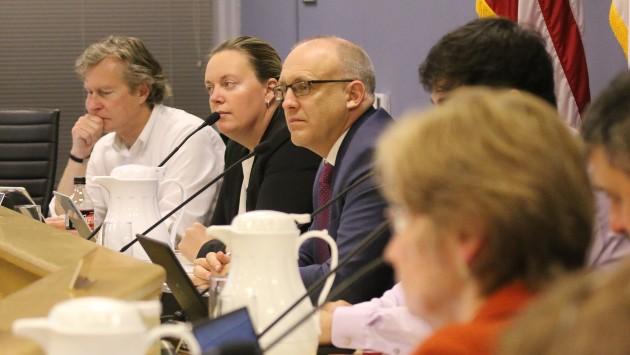 A plan to require property owners and tenants to clear public sidewalks after any snowfall — rather than just when snow is more than four inches deep — was put on hold Monday night after aldermen couldn’t reach agreement on its terms.

Alderman Don Wilson, 4th Ward, said residents were calling it a “zero tolerance” plan. He suggested anyone could end up being fined because nobody gets 100% of the snow off their walks.

He also voiced fears that the new ordinance could change what he said was the general rule under state law that homeowners aren’t legally liable if someone slips and falls on a snow- or ice-covered public walk in front of their home.

But Alderman Peter Braithwaite, 2nd Ward, praised the lower fines included in the latest staff revision of the proposal and said the Council was close to having a workable solution.

Alderman Cicely Fleming, 9th Ward, objected to the idea that residents on corner lots would have to clear the crosswalks to the street. She said one of her neighbors uses a snowblower first thing in the morning to clear the crosswalks, but by the time he comes back from work, city plows “have plowed it in and it’s a block of ice” — impossible to clear.

She also voiced fears that neighbors would rat each other out to the city about shoveling because of interpersonal conflicts.

Alderman Judy Fiske, 1st Ward, said the city should focus enforcement efforts on business districts — to get those cleared right away. In some residential areas of her ward, she said, there’s so much foot traffic that snow quickly gets packed down and becomes unclearable, and those homeowners shouldn’t be penalized.

But Alderman Melissa Wynne, 3rd Ward, said shopkeepers in her ward are much better about clearing snow than residents.

She said she has had many phone calls with people who are furious that the same folks on their blocks never shovel and the walks become treacherous.

Alderman Ann Rainey, 8th Ward, said the reality now is that the city can’t do anything to force public-walk snow shoveling unless there’s more than four inches of snow.

“We should make it so anytime it snows youy have to clearn the sidewalk,” she said. But she added that using door hangers to remind people about the new rules should be sufficient for enforcement.

Interim City Manager Erika Storlie said the current system isn’t working, but it didn’t appear from the discussion that the staff proposal was what aldermen were looking for.

She suggested concerns about overly-aggressive enforcement were likely overblown.  “The reality is that with very limited staff available,” Storlie said,
We’re probably issuing 20 or fewer snow shoveling tickets a year,”

The aldermen voted to hold the snow shoveling proposal to give staff time to make further revisions to the plan, likely in time for the Council’s next meeting on March 9.