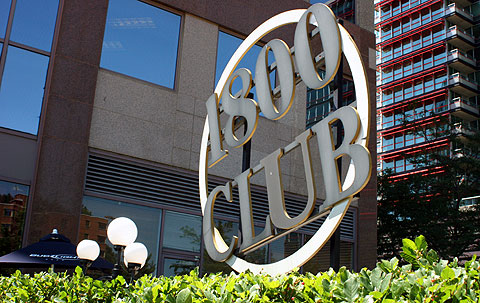 Update 8/3/08: We’ve now heard from folks who say the 1800 Club has only reduced its hours, not closed completely. More in the comments below.

The bar and other commercial tenants in the Northwestern University-owned building are required to pay property taxes on their leasehold interests in the building.

The building, constructed in the early 1980s, was sold to the university by developer Prentiss Properties in 2004.

The school agreed to cooperate with the city in arranging to have the building’s commercial tenants assessed for property taxes. It also made nearly $2 million in voluntary payments to the city and school districts over three years to cover lost revenue as university offices started to fill much of the building, which had been 40 percent vacant when the university bought it.

Most tenants pay up

Despite claims by university opponents that the city would likely collect little or nothing from the leasehold tenants, Cook County Treasurer’s office records show the tenants paid a total of $560,000 in 2006 taxes payable in 2007 and have paid nearly $314,000 in first-half 2007 taxes this year.

That roughly matches the $600,000 the university forecast the leasehold taxes would raise annually when it purchased the building. The building had generated over $950,000 in tax revenue when it was privately owned.

The county treasurer’s records show no payments by two listed tenants, H&R Block and Federal Express, but university spokesman Alan cubbage says they moved out of the building a year or two ago.

Cubbage said that the bar still has a lease for the space with the university and that school officials had not been notified about its closing.

Late pay, then not at all

Exactly when the bar closed is unclear. No sign was posted on the door, but in several visits in recent days the space was locked and dark during hours posted signs said it was scheduled to be open. A security guard in the building lobby claimed not to know anything about the bar’s operation.

Phone calls to the bar’s listed phone number were answered by a recorded message saying the voice mail box was full.

She said staff members believe the county is becoming more aggressive in addressing the non-payment problem and that the city is researching options to help make sure all the taxes are paid.

Cubbage said the university lacks the power to collect the taxes on the property and that the tax obligation is between the building tenants and the county.

The current economic climate has proved challenging for many restaurants, both nationally and locally.

Three restaurants in the Carlson Building downtown closed abruptly last week, and earlier this week the corporate parent of the Bennigan’s chain filed for bankruptcy protection leading to the shutdown of more than a dozen of its Chicago-area restaurants.