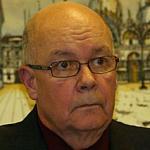 Evanston aldermen later this year will be asked to spend “less than $250,000” to have a consultant develop a comprehensive design plan for directional and informational signs around town.

Staff gave an update on the selection process to a joint meeting of the Economic Development Committee and the Transportation and Parking Committee Wednesday night.

The committees last spring approved seeking a consultant to do the job.

Parking Manager Rickey Voss told the committees Wednesday that 11 firms had responded to the city’s request for proposals on the project and that that after a review of the proposals five were brought in for interviews last month.

Voss said one firm, which he declined to name, “stood out as being exceptionally qualified.”

He said that firm agreed to exceed the city’s goals for minority, women and Evanston business subcontracting, brought its proposal in under the proposed $250,000 budget and offered broad national experience in developing sign programs for communities of different size across the country.

He said the firm also included an innovative plan to have high school students help with some of the project work — including mapping the location of existing signs.

City Planner Craig Sklenar said the design manual the consultants are to produce should be ready before the end of 2012, assuming the City Council approves the consultant’s contract at its December meeting.

Alderman Ann Rainey, 8th Ward, said she objected to the aldermen being given just one “recommended” proposal to review when voting on the project.

Community and Economic Development Director Steve Griffin responded that the staff could also provide proposals from the short list of five firms that made the initial cut.

Members of both committees have complained for years that Evanston lacks an attractive signage system to help direct residents and visitors to various destinations around the community.

Because of budget constraints, getting a new signage system completely installed across town is expected to take many years.

Are we there yet?