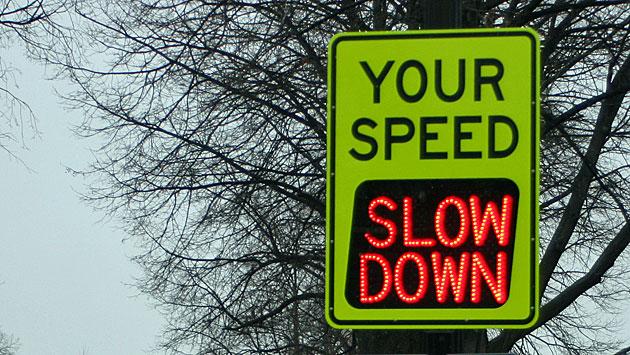 If you drive down Oakton Street in Evanston these days a sign may nag you about your speed.

Alderman Coleen Burrus, 9th Ward, failed again this week to persuade other City Council members to cut the speed limit on Oakton to 20 miles an hour, but city staff, trying to stave off what they fear would be an unenforceable rule change, have come up with alternative measures.

Those include the new illuminated sign with a built in radar gun that measures how fast drivers are going, displays their speed, and — if they’re going faster than 25 miles an hour — also flashes a warning to “slow down.”

Public Works Director Suzette Robinson said the sign, which can temporarily be attached to light poles around town, will be posted on Oakton at least six times a year.

The sign now faces eastbound traffic at the Chute Middle School playground. At that point the speed limit is 30 miles an hour much of the time, but 20 miles an hour “on school days when children are present.”

Police Chief Richard Eddington has promised to add monitoring speeders and violations of the truck weight limit on Oakton to the responsibilities of a a new problem solving officer to be named for the ward.

And Robinson said she’d work to ensure that resurfacing of Oakton is included in the city’s new five year street paving plan. Some residents along Oakton have claimed that speeding trucks on the worn surface of the street have caused walls to crack in their houses.