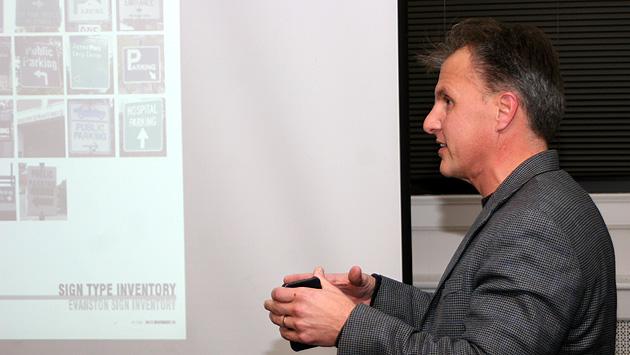 Consultants hired to develop a wayfinding signage program for Evanston told city committees Wednesday night that the city has far too many signs already.

Evanston has 1,180 wayfinding signs now, said John Bosio a partner at Merje design, and that’s “an extraordinarily large number of signs for a city this size.”

And that count doesn’t include traffic regulatory signs or street naming signs.

And, folks, the consultants also think our signs are pretty ugly.

The city has 16 different designs just for signs intended to direct people to parking garages and lots, and there’s no consistency, Bosio said.

Top: Consultant John Bosio with examples of some of the signs used to identify parking lots and garages in Evanstson. Above: Consultant Pat Saldan Natke of Urban Works.

And most of the signs don’t meet current Federal Highway Administration standards for wayfinding signage, which, among other things, require type at least four inches tall on signs meant to be read by drivers on urban streets with speed limits of 25 miles per hour or less, and that they list no more than three destinations.

An current sign with type too small and too many destinations listed — including one that’s no longer in Evanston.

In presentations to the Transportation and Parking Committee and the Economic Development Committee, the consultants suggested developing a clear-cut signage system, like ones they’ve worked on in a variety of other communities, from Phoenix to Charlottesville, Va.

From the consultants’ presentation: A contemporary-looking sign directing traffic to a parking garage in Phoenix and indicating the destinations served by the garage.

A sampling of more traditional signs designed for Charlottesville, Va., home of the University of Virginia.

The city only has funds allocated to implement a new wayfinding system in a handful of areas, but hopes the consultants will develop an overall system that can eventually be applied citywide.

Consultant Pat Saldan Natke said the next step in the process is for the consultants to meet with representatives of various stakeholder groups to help develop the signage plan. Those meetings are expected to take place in January.

And for those old enough to remember, here’s the 1971 hit by the Five Man Electrical Band that our story’s headline riffs on.