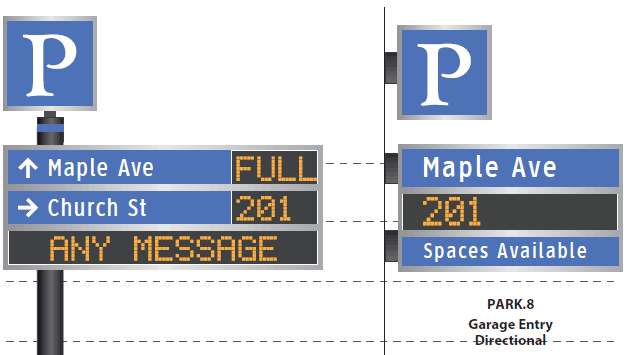 More than five years after a consulting firm recommended adding space-available signs to the city’s parking garages, Evanston aldermen Monday are scheduled to vote on a contract to add such signs downtown.

The 2014 proposal was part of a larger wayfinding sign plan that has largely fallen by the wayside because of disagreements about cost and the design aesthetic for new signage.

The purchase would also include data analytics software that would provide detailed information on hour-by-hour utilization of the garages and on-street pay-per-spaces parking slots that would be made available online.

In a memo to aldermen, Storlie says that based on the vendor’s experience in other communities the $147,876 system from Automated Parking Technologies should pay for itself within two years of implementation as a result of better utilization of garage spaces.

Parking capacity sign mockups from Automated Parking Technologies. The free-standing five-foot by 45 inch version is on the left and a garage-wall-mounted sign, 15 inches by 39 inches, is on the right.