Evanston police now say a gunshot fired by an officer last week injured both the suspect in a domestic violence case and a rookie fellow officer.

Commander Tom Guenther today provided a more details on how the incident unfolded in a apartment at 1506 Pitner Ave. about 9 a.m. on Oct. 8. 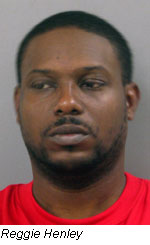 Guenther says when police arrived at the building a relative of the abuse victim told them they could find the suspect, identified as 28-year-old Reggie Antonio Henley, inside an apartment there. After telling them the suspect was known to have a gun, she let them into the apartment using her key.

Guenther says the three officers found Henley seated on a couch in the living room and that on a coffee table in front of him they saw a large stack of currency and plastic baggies, which they believed indicated he was dealing narcotics.

The officers say the suspect refused to answer questions and that when they tried to take him into custody as required by state law in domestic violence cases, an officer spotted a handgun on the floor at the suspect’s feet.

Guenther says that when the officer shouted "gun," the suspect grabbed for the weapon and an officer fired one shot that struck Henley in the neck and bicep. An officer struggling with the suspect also suffered an injury to his arm, either from the bullet or the explosive blast created by firing the gun.

As the officers continued to struggle with the suspect, Guenther says, one of them spotted the suspect’s gun on the floor and managed to grab it and unload it.

Police say Henley’s gun, a 9 mm Beretta automatic, had a live round in the chamber and nine rounds in the magazine.

The officers radioed for backup and requested an ambulance. Once backup units arrived the suspect and all three of the officers involved were transported to local hospitals.

The officers were treated and released, the suspect is still being treated for his injuries.

The officer who suffered the arm wound had been on the street just three days after completing his police academy training.

Henley now is scheduled to appear in Skokie district court on Oct. 24 to face a variety of charges including domestic battery, aggravated assault, resisting arrest and narcotics possession with intent to deliver.