City Council voted Monday to exempt one area from a two-month extension ofÂ its west side building moratorium.

City Council voted Monday to exempt one area from a two-month extension ofÂ its west side building moratorium.

A padlock secures the gate to the former railroad right-of-way, most recently used as a bus parking lot.Â

The moratorium was imposed on April 11 to give the city time to plan for anticipated redevelopment of the industrial area on the west side that runs along the former rail corridor. The moratorium was extended once before, in August, and had been scheduled to expire today.

Plans developed for the area by city consultants will get a second hearing before the Plan Commission Wednesday and are expected to be up for City Council consideration in January.

At Monday's council meeting Joan Safford of 1618 Wesley Ave. objected to exempting the Bishop Freeman property from the moratorium extension, saying it could disrupt plans for new streets and bicycle paths contained in the area-wide planning documents.

Mary McWilliams of 1606 Wesley Ave. said the planning process for the west side had "opened my eyes to the complexity of city planning" and voiced hope that the planning process would "bring two neighborhoods together." She said allowing the exemption would weaken the plan and undermine its basic premise.

The Bishop Freeman Co.Â once made folding tables and laundry machinery at itsÂ plant in Evanston.Â

Alderman Lionel Jean-Baptiste, 2nd Ward, defended the exemption saying the developers of the Bishop Freeman site "have been involved in every meeting" on the west side plan. "They understand the plan, they know the expectations and they intend to stay consistent with the plan's guidelines," Ald. Jean-Baptiste said.

Cyrus Homes Chairman Walter Kihm says his firm's proposal for the site will match the housing density proposed in the consultant's report, but that it will include a greater variety of housing types.

The plans, developed by FitzGerald Associates Architects, call for six- and nine-flat condominium apartment buildings to front on Foster Street, a mid-rise mixed use condominium building fronting on Emerson Street and townhouses in the center of the property. 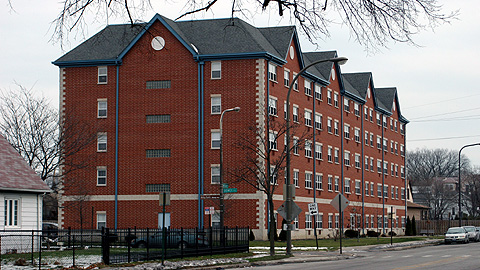 The new proposal will still need to go through the city's planned development approval process which requires several public hearings and typically takes several months to reach a final vote by the City Council.

Cyrus President Ron Fleckman said units in the Church Street Village project have continued to sell at a steady pace, despite reports of a slowing housing market. He said another one or two units have been sold since groundbreaking for the project last month.

Mr. Fleckman said that although the new development may be "in the pipeline" before the city's recently approved inclusionary housing ordinance takes effect, it will include an affordable housing component on site.

"It's the right thing to do and important for the neighborhood," he said.

He said he sees a need for new housing for young professionals — "children of people who've lived on the west side all their lives" — who would like to move back to Evanston, but find nothing appropriate to their needs in the neighborhood now.

The developers also say they plan to bury utility lines that now cross the site diagonally along the old railbed as part of the landscaping plan for the site.

It was just about a year ago that an earlier proposal for the Bishop Freeman site from a different developer ran into a chilly reception from city officials at a Site Plan and Appearance Review Committee meeting.