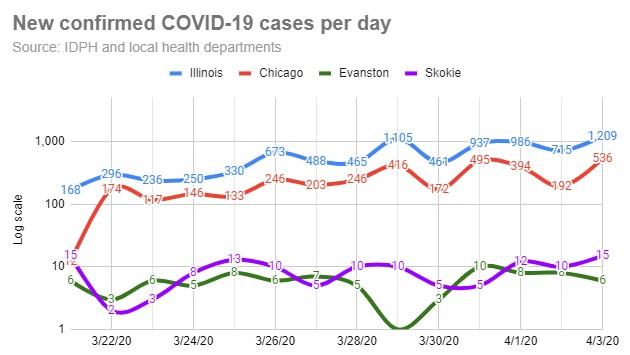 On the day a new COVID-19 treatment facility opened at Chicago’s McCormick Place, Evanston recorded six new confirmed COVID-19 cases today, bring the total here to 103. The statewide count rose by 715 to a total of 8,904.

Update 7:30 p.m.: Early this evening the Evanston RoundTable reported that a second resident of the Three Crowns Park retirement community has died of COVID-19. That death presumably will be reflected in Evanston’s reported death toll tomorrow.

The state reported testing 4,392 people for the disease since yesterday, one of the highest testing numbers since the pandemic began. Gov. J.B. Pritzker, at his news conference this afternoon repeated his hope that the state will soon be able to test as many as 10,000 people per day, but said a continuing lack of equipment and supplies is making it difficult to reach that goal.

The governor today said new data suggests that wearing face masks “when you do go outside, or when you must go to the grocery store” is a good idea. Some public helath officials worry that broader use of face masks could make it harder for hospitals to obtain supplies.

The new field hospital at McCormick Place is designed to treat COVID-19 patients with mild or moderate symptoms, and patients will be referred there after initially being treated at other hospitals.

The McCormick place facility opens with a 500 bed capacity, but is projected to be able to scale up to house as many as 3,000 patients in coming weeks.