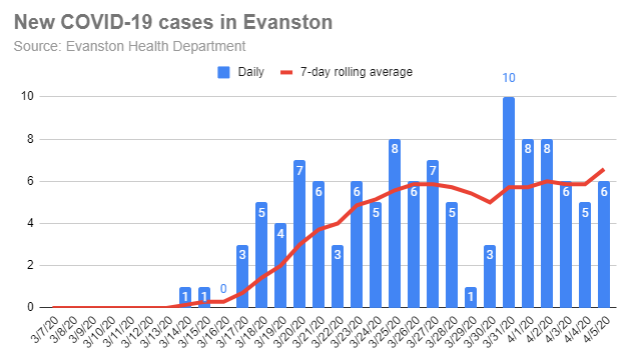 The chart above shows Evanston’s daily count of new cases along with the seven-day-average of new cases, which smooths day-to-day variations and may provide a better indication of when the city has started to “bend-the-curve” enough to signal that the peak of the pandemic here has passed. The equivalent data for the state as a whole is shown below.

At his news conference this afternoon, Gov. J.B. Pritzker discussed a new program that will see the state cover most or all of the cost of child care services for all workers deemed essential under the state’s stay-at-home order and praised efforts by operators of small group child care centers to pick up the slack when many larger child care centers were ordered to close because of the risk of spreading the disease.