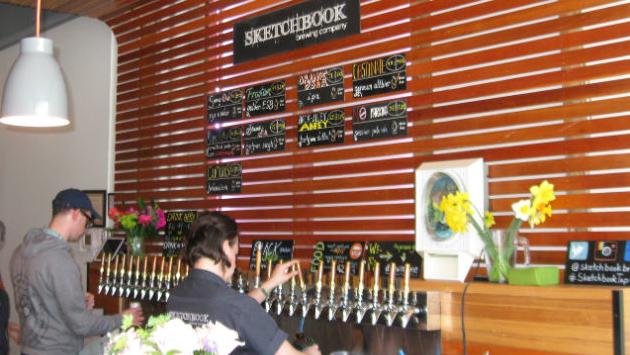 No longer do patrons of Evanston’s first nanobrewery have to trek down a long alley to fill their howlers and growlers. Now they step in at street level to the new tap room of the Sketchbook Brewing Co. at 821 Chicago Ave., across the street from the Main Street CTA terminal.

Finishing touches were still being applied Friday to the brewery’s new facility that sits atop the space that still contains the equipment that produces the company’s growing menu of beers.

Business was booming Friday afternoon as the first official customers since the “soft opening” munched on sandwiches from the nearby Hewn Bakery while they quaffed and chatted.

Formerly, all they could do was fill their beer containers and leave. 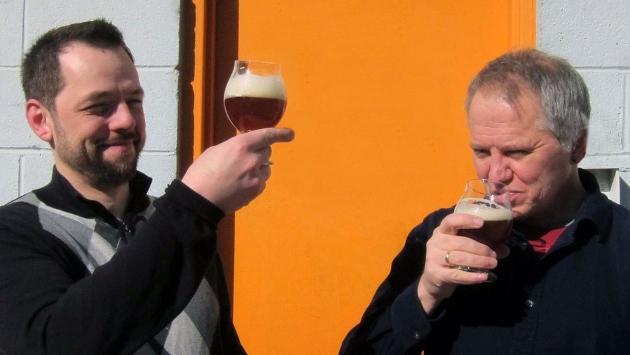 Marron and Decker sample their product as the company grows and prospers.

Founders Cesar Marron, 38, and Shawn Decker, 58, who met a couple of years ago at meetings of the Evanston Homebrewers Association, appeared to be enjoying the hustle and bustle of their joint venture that first appeared on the scene in November of 2014.

Today, they said, their brews can be ordered at some 30 restaurants in Evanston and the northern portions of Chicago, and they are looking forward to attracting new customers that get off the “El” and grab a beer to relax and socialize after work. 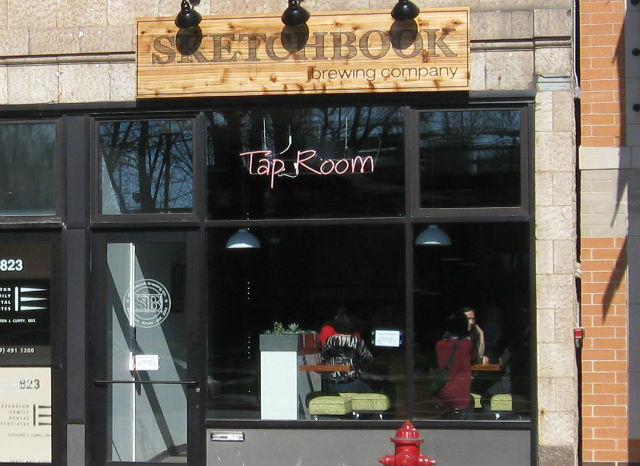 The storefront sign as seen by"El" riders at the Main Street CTA station.

The new tap room is now open six days a week, from noon until 10 p.m. Tuesday through Thursday, noon to 11 p.m. Friday through Saturday, and noon to 8 p.m. on Sunday. While they’re closed on Monday, some employees still come to work to generate the 20 or so different beers offered to customers. 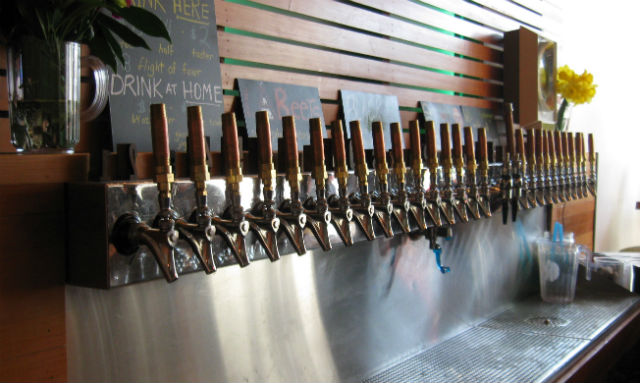 To handle the volume, they now have the availability of some 30 taps, although currently only 24 of them are needed.

Decker still has his “day job” as a professor at the School of the Art Institute of Chicago, while Marron, a software engineer, finds that more of his time is being devoted to the brewery.

Also, hard at work serving customers and participating in all aspects of the business are their wives, Amy Wilkinson and Alice George.

On a wall toward the back of the facility are signatures of many of the original 300 members who contribute monthly to purchase beer under a “customer-supported brewery” concept that now numbers about 500.