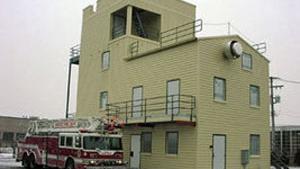 Evanston's City Council is scheduled to approve an intergovernmental agreement later this month with the Village of Skokie for shared use of the village's fire training facility.

The Skokie Village Board gave preliminary approval to the deal Oct. 1.

Under the agreement Evanston will pay $286,000 toward capital improvements for the drill tower at Skokie's Fire Station 17 at 8157 Central Park Ave.

"This is a great opportunity for our community and we are very grateful to the Village of Skokie for their consideration,” Klaiber said.

A tour of the facililiy for Evanston officials is sheduled for 3 p.m. Monday, ahead of a City Council vote on the plan scheduled for Oct. 22.

The training tower was built when Skokie's Station 17 was constructed in 2003.

Skokie Fire Chief Ralph Czerwinski said the two departments have conducted joint training exercises several times a year over the past two years, which led Evanston officials to recognize the advantage of having a dedicated training area.

Czerwinski estimated that a new drill tower would cost nearly $900,000 — not included land for the site — and said he's pleased Skokie was able to offer Evanston "a cost-effective alternative" to building its own tower.

He said the collaboration is financially responsible and functionally appropriate and improves the abiliy of each agency to serve its community.

Skokie currently has a class one fire insurance rating from the Insurance Services Office, the highest available. Evanston recently improved its rating from a class three to a class two on the ten-level rating scheme.