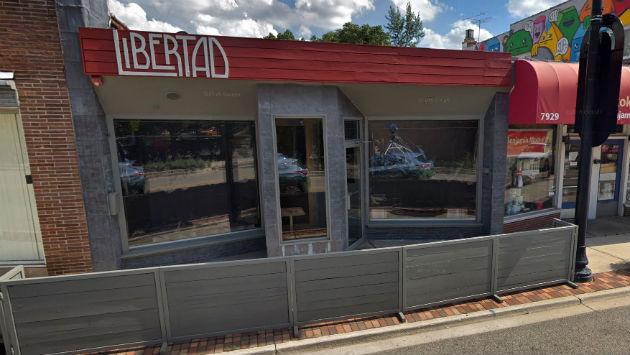 The co-owner for the past eight years of the Skokie restaurant Libertad has plans to open two new restaurants in Evanston — including one in the city-owned former Cafe Coralie space at 633 Howard St.

City staff will ask the city’s Economic Development Committee tonight to recommend that City Council authorize negotiation of a lease-to-own agreement with Marcos Rivera of Libertad and Arturo Orozco Jr. for a new casual restaurant in the Howard Street space, which for many years was used as the Howard Street police outpost.

A dish from Libertad’s menu.

City officials approved the plans for Cafe Coralie to open on Howard in early 2017, but it closed last July after falling behind on payments to the city.

Eater described the 40-seat Libertad when it opened as the first “modern Latin” spot in Skokie and noted that Rivera had formerly been a partner with his father in the popular Las Palmas restaurant in Bucktown.

He’s hoping to open in time for New Year’s Day brunch at the start of next year.

Rivera also recently announced plans, with partner Piloto Nieves, to open Zentli, a full-service restaurant with a focus on Mexican culture and art, in the former Curt’s Cafe south location at 1813 Dempster St.

The EDC tonight is also scheduled to consider a tax abatement application for Mohamed Eldibany’s planned event space in the former Sherwin-Williams building at 611-621 Howard St.

And the Plan Commission tonight is scheduled to consider rezoning properties from 951 to 1125 Howard — that’s from Ridge Avenue west to Barton Avenue — from the C1 commercial district to the B2 business district.

The zoning change would allow for mixed use development with residential uses above the ground floor — including the proposed 60-unit senior citizen housing building planned at 1015 Howard.