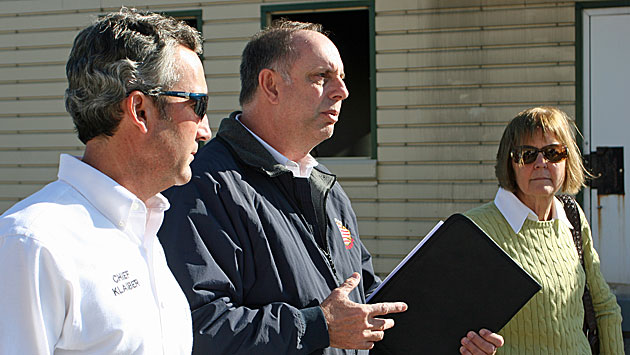 Officials from Skokie and Evanston gathered this afternoon to talk up an agreement between the two towns that will give Evanston regular access to Skokie's fire training tower in return for funding from Evanston for improvements to the structure. 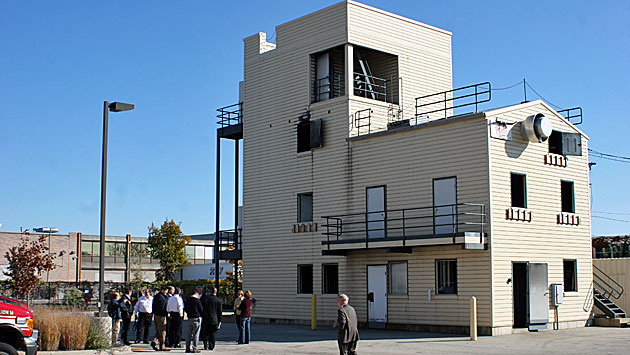 The funds from Evanston will pay to install new Padgenite insulating boards in the tower's fire rooms to replace an insulation system that failed as a result of heat and water damage from use since the tower was built in 2003.

And it will also pay to install a gas-fired burner system to create the fires used for training. 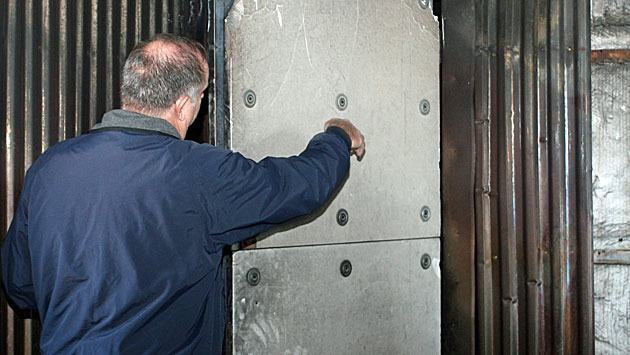 Czerwinski points to a sample of the new style of insulating board the fire rooms will be fitted with.

Until now Skokie has used wood fires fueled by pallets and other scrap lumber that Chief Ralph Czerwinski says has proved difficult to control.

Czerwinski says switching to gas will also eliminate the need to spend time cleaning up wood scrap from the fire between drills, which will make it possible to train more fire companies in less time. 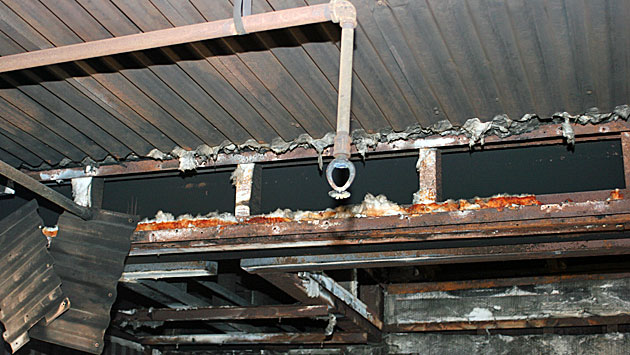 Remnants of some of the old insulation system that failed. Skokie officials say fire-room temperatures can easily reach 600 degrees — but when temperature sensors melted during a training exercise, they knew they wanted to switch to a more controllable gas-fired system.

Evanston Fire Chief Greg Klaiber said the new agreement, which is scheduled for City Council approval next week, will save Evanston the cost of building its own fire tower.

That project, estimated at $800,000 to $900,000, not including land purchase costs, has been in the city's capital improvement plan for a decade, the chief said, but hasn't moved forward because of competing priorities. 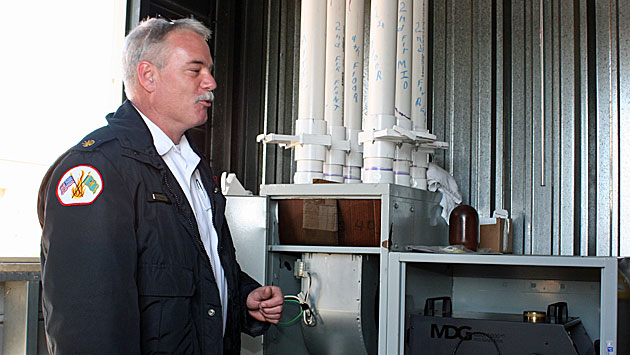 Evanston two years ago improved its fire insurance rating from a class 3 to class 2, but failed to reach the top class 1 rating, because of its lack of a fire training site and some issues with its communications equipment, Klaiber said.

Only two percent of communities in the country have the class 1 rating, Klaiber added, but Skokie is one of them, and he hopes Evanston will be able to close the gap with access to the training tower.

Under the plan, which has already been approved by the Skokie Village Board, during each month Evanston and Skokie will each have exclusive use of the tower for one week, they will train together a third week, and the final week will be reserved for maintenance work on the tower.

Klaiber says Evanston firefighters now get similar training only twice a year at the NIPSTA facility in Glenview.

Being able to train at Skokie's First Station 17, less than a mile from the Evanston border, will make it possible to have on-duty companies train there and still be able to respond to emergency calls in Evanston, Klaiber added, reducing training costs.