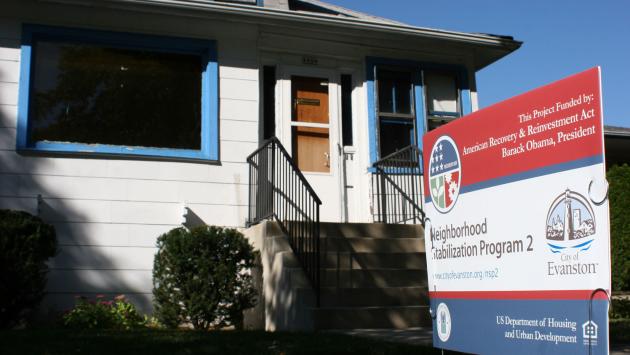 Small Evanston-based and minority contractors say slow payment policies under the city's $18-million federal housing rehabilitation program are keeping them from participating in it.

But the city's Economic Development Committee this week postponed action on a plan from the Evanston Community Development Corporation to try to address the issue amid a variety of concerns about the proposal.

The contractors say that the way the federal Neighborhood Stabilization Program grant is now being administered, contractors are required to buy materials up front, but don't get paid for the materials until up to 90 days after the work is finished.

The contractors say they lack the capital to carry those costs for that length of time.

ECDC Board Member Ron Fleckman said, "Credit markets are terrible. Contractors used to be able to get net-30 payment terms from merchants. But now it's pretty much cash on the barrelhead."

Local contractor and ECDC Board Member Bill Smith said most "small contractors won't be able to participate in NSP2 unless this is fixed. The model doesn't work because the margins are too tight."

ECDC proposed that the city give it $120,000 to make revolving loans to small contractors to cover the up-front cost of the materials.

City staff proposed reducing that amount to $50,000, but noted that the city's legal staff has raised questions about whether the program would be subject to challenge under competitive bidding rules, because the loans would only be available to Evanston-based and minority or women owned businesses.

But some committee members questionned why there was need to get another agency involved in solving the problem.

Sarah Flax, a key city staff member involved in administering federal grant programs including NSP2, said the city has made a small step already to reduce the payment delays by agreeing to process contractor invoices twice a month rather than once a month.

And she said city staff is discussing with Brinshore Development, the private company partnered with the city on the grant program, whether Brinshore could purchase the materials contrators need rather than asking the contractors to provide them.

Alderman Ann Rainey, 8th Ward, said that might also reduce total project costs because Brinshore should be able to get discounts from vendors because it would be buying materials in larger quantities.

Alderman Jane Grover said she wants to see a solution developed, but "with a long list of questions still unresolved" she proposed continuing the discussion at the committee's April meeting.

Rainey added that city staff and a member of the Economic Development Committee should meet with Brinshore before the next meeting "to understand what the heck is going on" so committee members would have personal knowledge of the issue by next month.

Editor's note: ECDC Board Member Bill Smith is not related to Evanston Now publisher Bill Smith, who wrote this story.