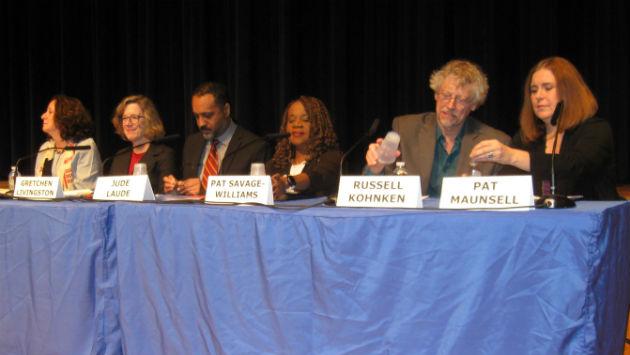 The candidates nearly outnumbered the dozen or so members of the audience Tuesday night at a forum in the cavernous auditorium at Evanston Township High School for six persons vieing for four positions on the school’s District 202 Board of Education.

For 90 minutes the three incumbents and three challengers pretty much agreed with each other about the need for the school to do a better job of educating African-American and Hispanic students that traditionally score below white students on state and national standardized tests.

At the same time, they all professed a desire for the school to continue its practice of providing opportunities for the less academically inspired students to prepare themselves for careers that do not necessarily require a college education.

All three of the challengers brought to the panel considerable experience dealing with the issues that face a high school board.

In alphabetical order, Russell Kohnken retired recently as a chemistry teacher at the school and currently serves as high school education chair and science coach for the Chicago American Chemical Society and as a webinar presenter for the American Association of Chemistry Teachers.

Jude Laude, a 1984 graduate of ETHS, has been an educator for 26 years, most of it with inner city schools in Chicago. He has nearly 10 years of experience as a school counselor and is currently working at North Lawndale College Prep High School.

And Pat Maunsell , who holds a masters degree in education and social policy from Northwestern University, says she has spent 30 years working in education and advocating for kids as a classroom teacher, a senior manager at national organizations, and as a consultant for local and national school districts and education organizations.

The incumbents include Gretchen Livingston, Pat Savage-Williams, and Anne Sills.

Livingston is completing her second four-year term on the board. An attorney, she is a former president of the board and serves as the vice chair of Ed-Red, the advocacy organization for suburban school districts.

Savage-Williams is completing her second year as president of the board. As an educator for 35 years, she is the Special Education Coordinator and Equity Leader at New Trier High School. A 37-year resident of the Evanston/Skokie community, she has two daughters who went through the local public school districts and on to graduate from college at the University of Iowa and Washington University in St. Louis.

Anne Sills, the newest member of the board, is completing the term of Bill Geiger, who moved from the district two years ago. An ETHS graduate, Sills says she has been an advocate for public education in Evanston for 25 years. She was an unsuccessful candidate for the board in the 2015 school board elections, but was subsequently appointed to the board to fill the Geiger vacancy.

The school board elections will be held April 4, with early voting beginning on March 20.

Last night’s forum was co-sponsored by the Evanston/Skokie PTA Council, the League of Women Voters of Evanston, the Evanston Community Foundation, and ETHS Parents Engaged.