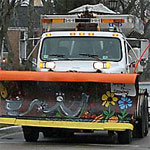 Evanston's Public Works Department plans to have at least a dozen plows operating overnight tonight to handle what officials now expect will be just one to two inches of snow in the first storm of the season.

Streets and Sanitation Superintendent Jim Maiworm says crews are already pre-salting the roads to deal with the anticipated rapid drop in temperatures before today's rain changes to snow.

Maiworm says only scattered flurries are expected after midnight, but thre will be high winds and a low temperature of about 25 degrees by Friday morning.