Dozens of "snow fighters," Public Works Director Suzette Robinson's term for city workers who helped clear away the snow after last month's blizzard, crowded into the City Council chambers Monday night to hear their efforts praised in a presentation to aldermen. 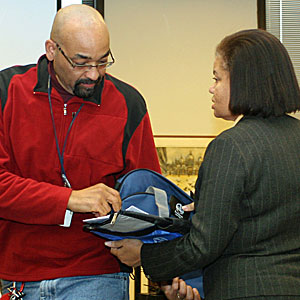 The workers drew praise from the aldermen at the Administration and Public Works Committee meeting as well, and learned they'd be getting gym bags as a token of the city's appreciation.

Later, at the full City Council meeting, Assistant City Manager Marty Lyons reported that — comparatively speaking — the winter season has been less costly to the city than residents might imagine.

He said the total cost to date for snow removal efforts all winter has been $928,000.

That's more than last year — but much less than the $1.46 million the city spent two years ago.

Lyons says that while the city faced the monster storm this winter. two years ago it saw more total snow spread over more snow events. That meant crews had to be put on overtime to deal with storms more often.

And two years ago the price of road salt soared to heights not seen before or since.

Above: Suzette Eggleston shows a "snow fighter" one of the gift gym bags with its city logo. Top: City employees hear their work praised at the city council committee meeting.