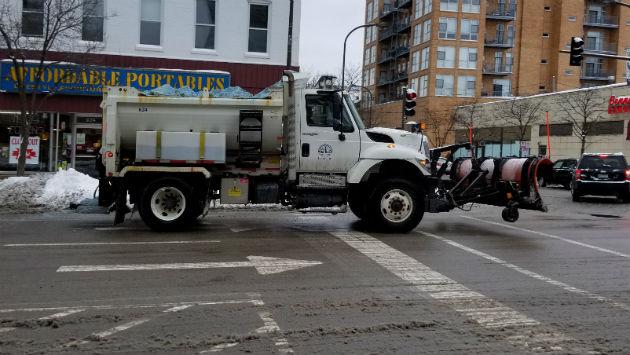 Evanston is expected to see some snowfall from a winter storm entering the Chicago area later today.

Edgar Cano, the public services bureau chief for the city, says the city’s forecast service anticipates the storm will arrive about 5 p.m. and leave an accumulation of two to three inches of snow on city streets.

Snow is expected to come down moderate to heavy at times, Cano says, before transitioning to sleet, freezing rain, then rain.

“We are hoping south winds help change the precipitation to rain sooner, which will lead to lower snow accumulation,” he says, adding, “The rain and warm temperatures on Wednesday should assist in melting the snow before temperatures drop Wednesday evening.”

Crews are on alert and preparing for the event. Cano says streets are being treated with salt brine and staff will be on patrol once the precipitation begins.

The National Weather Service says the Chicago area could get two to five inches of snow from this storm, and notes that with temperatures near freezing, the heavy, wet snow may be difficult to shovel.

Cano says we can look for another storm on Friday, but that may turn out to be just rain, rather than snow.

The city has not declared a snow emergency, but Cano says voluntary cooperation tonight can reduce the need for parking restrictions in the days to come.

They also note that a city ordinance requires property owners and tenants to clear at least a 36-inch wide path on sidewalks within 24 hours of any accumulation of snow or ice.