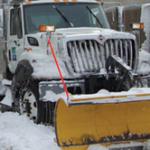 Although there’s no snow in sight for Evanston, residents nevertheless will be expected to honor the snow parking regulations that begin Saturday and continue through March 31.

Signs on every block will tell you what you must do to make it possible for the city’s snow plows to clear the way for traffic throughout the city after a parking ban or snow emergency has been declared.

All it takes is two inches of snow to fall to trigger the emergency sirens that herald a snow emergency in the city. Permanent red, white, and blue signs indicate that parking is illegal on the major thoroughfares designated as snow routes between 11 p.m. and 6 a.m. The ban remains in effect for one or more nights, even though the street may appear to have already been plowed. 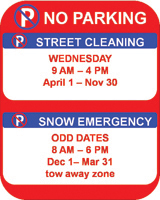 The city does not plow alleys, although many blocks of neighbors contract with private companies to remove the snow in their alleys.

Homeowners and businesses are responsible for clearing sidewalks adjacent to their property within 24 hours after ANY snowfall. Violations of this provision should be reported to the city by calling 3-1-1, although it’s considered a neighborly thing to do to help your elderly or disabled neighbors to comply for the benefit of your entire neighborhood.

That's what teenagers are for.

Complete details of snow-removal regulations are available on the city’s website.