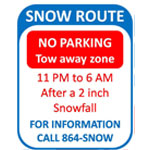 The city has declared a snow route parking ban for tonight in Evanston.

Residents are asked to follow instructions on the red, white and blue signs on their streets to allow the city to effectively clear the snow.

Streets and Sanitation Superintendant James Maiworm says that based on the latest forecast Evanston can now about four inches of snow.

With low temperatures tonight near freezing, some forecasts project east-northeast winds off the lake will cut snow totals here here by as much as an inch.

Given these variables at this time, Maiworm says, he doesn't believe a snow emergency — banning parking on side streets — will be needed tomorrow.

Emergency sirens will sound to alert people to move their cars at 8:15 p.m. tonight.

Main thoroughfares designated as snow routes will be cleared first, and parking is illegal on these streets from 11 p.m. tonight until 6 a.m. Friday.

Even if plows have been through, snow removal operations may require return visits by City trucks. The fine for violating the snow route parking ban is $50 plus towing and storage charges.

Questions about snow removal can be directed to 311.