Our occasional correspondent, Mr. Cranky, reports today that while many Evanstonians have faithfully performed their neighborly duty of shoveling the walks in front of their properties, an annoying minority have slacked off. 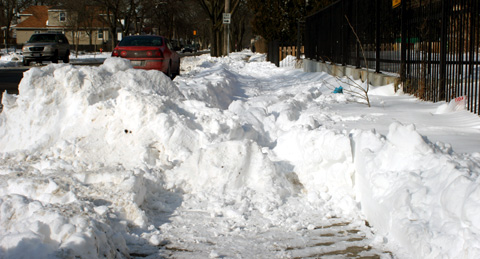 "Look at this," Mr. Cranky says, brandishing a photo of the impassible sidewalk in front of the Family Focus building in the 1700 block of Foster Street.

"Or this," he adds, pointing to a picture of the 1700 block of Wesley Avenue where a sidewalk shoveled clear in front of one home runs into the untouched — except by tromping feet — walkway next door. 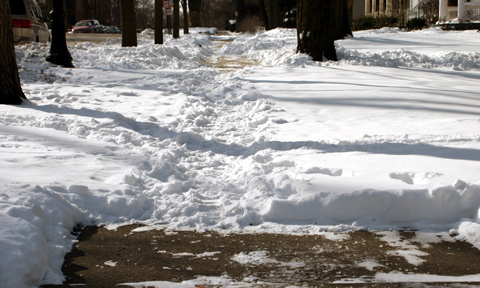 Mr. Cranky then insisted on reading from the Evanston City Code:

(A) Sidewalks: Every owner or occupant of any dwelling house or other building, or proprietor or lessee of any enclosed lot or premises, within the City shall, during winter months, whenever there is a snowfall with an accumulation of four inches (4") or more and within twenty four (24) hours of said four inch (4") accumulation, clear the sidewalks in front of or adjoining such house, building or premises of snow or ice in order to give access to abutting property and public ways, and keep the same conveniently free therefrom; or shall, in case the snow and ice are so congealed as not to be removed without difficulty or injury to the pavement, spread the same with sand or salt. Every such owner or occupant shall also, at all times, keep such sidewalks clear and free from all obstructions so as to allow pedestrians the safe and unobstructed use of the same. (Ord. 9-0-80)

At Mr. Cranky's insistence we called the city's property standards director, Stan Janusz, this morning to check on what the city's doing to enforce the snow-shoveling requirement. But so far he hasn't called back.

We did see snow plows still at work cleaning up city streets, and even Mr. Cranky said they deserved praise for keeping at it despite the cold weather we're having.