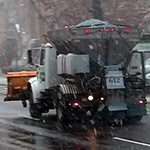 New forecasts have cut the amount of snow expected from now through early tomorrow roughly in half.

Evanston Streets and Sanitation Superintendent James Maiworm says it now appears no more than a half inch of additional snow will fall by midnight and perhaps another quarter inch from then until 8 a.m.

Snow cleanup operations will continue tonight, he says, with a continued focus on parking lanes shifting to business district cleanups in the overnight.

The possibility of more snow continues for the next two days but the amounts, he says, will likely be low.